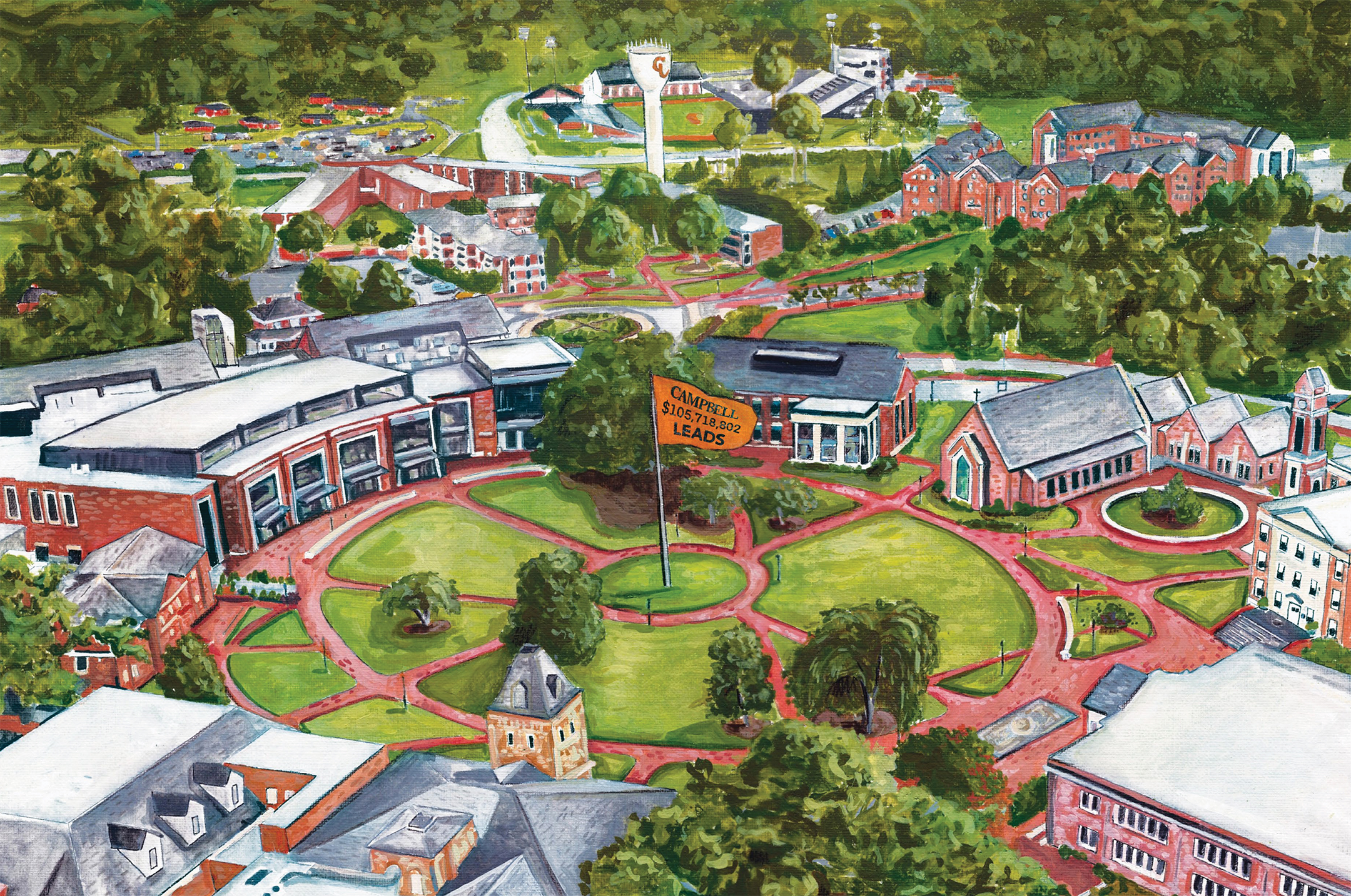 A Celebration of Giving

More than $105 million was raised during the five-year Campbell Leads campaign, funding student scholarships, a new student union and the general fund.

To celebrate this achievement, we honor those who gave and share the inspirational stories of those who benefit from their generosity.

By Billy Liggett
Photos by Ashley Stephenson and Ben Brown

to what we value. To what tugs at our heart. We give to what we connect with. Where our passions are. Presented with the simple question, why do we give, J. Bradley Creed hearkens back to the most notable miser in literary history, Ebenezer Scrooge. “I think the most miserable people I know are those who keep it all to themselves,” he says. “Altruism is part of being a whole person. And in the end, Scrooge became a very generous man.”

Campbell University’s fifth president knew a student union was coming before he was ever offered the job. It was months before his first day in office — a November 2014 interview with the presidential search committee in a north Raleigh hotel room — when Creed caught wind that Campbell lacked such a building and that one was sorely needed.

“I flew back to Birmingham, and my wife asked, ‘How’d it go?’” he recalls. “I said, ‘Well, I think it went really well. They’re really fine people. But whoever this next president is, they’ll need to lead the way in constructing a student union building.’ They were really determined about it.” Three things that go together like the legs on a stool, Creed jokes, are presidential inaugurations, strategic plans and capital campaigns. Not long after his own inauguration ceremony in April 2016, Creed announced his strategic plan and the capital campaign that would fund it. The Campbell Leads campaign would focus on three high priorities — student scholarships, the Fund for Campbell and that aforementioned student union.

The goal: $75 million in five years. It was ambitious — the last major campaign under President Jerry Wallace came over a decade prior with the $30 million convocation center, built in 2008. But it was vital to Campbell’s future, both short term and long term.

And while that beautiful 110,000-square-foot campus-transforming center of student activity has gotten most of the attention over the course of the five-year campaign, the heart of Campbell Leads, to him, is in the endowed scholarships that have been and will be created because of it.

Over $44 million of the $105.7 million raised from 2016 to the end of 2021 (yes, Campbell obliterated that initial $75 million goal) is for endowed scholarships for undergraduate and graduate students.

Since his days as a dean at Baylor University, Creed has been a fervent advocate for scholarships to provide an equal playing field for students of all economic backgrounds. He saw firsthand how they benefited students under his charge.

A breakdown of how the $105.7 million raised during the Campbell Leads campaign is being distributed to meet the immediate and future needs of Campbell University:

There’s a personal connection, as well. When Brad and Kathy Creed lost their oldest daughter, Caitlin, to a car accident while a freshman at Baylor, they chose to honor her by setting up a scholarship in her name. Two weeks later, Creed received a phone call from a development officer at Baylor who said because of the generosity of the community that mourned with them, the scholarship was already fully endowed.

“This was the worst thing that ever happened to our family, but there was a lot of grace that came out of all of it,” says Creed, who started a similar scholarship at Samford, where he served as vice president before coming to Campbell. “We get letters every year from students who tell us what our scholarship has done for them. And their stories are amazing and very touching. And they know about our daughter, too, because they took the time to learn about her life.”

Next: Why We Give | Dr. James Purvis