“We were at a basketball camp at Campbell College back when Pete was in the 10th grade. Every night there was a counselors’ game with the college kids who were on staff. Sometimes they’d let a high school kid or two play. Pete was in there on a night when [Boston Celtics Hall of Famer] Bob Cousy was playing. … Pete comes across half-court and throws this amazing half-court pass with spin on it, and Cousy stops the game. Stops the game and says, ‘Time out. Who in the hell is that kid?’”

Rick Houston had just finished his last junior varsity basketball game in 1972 at South Rowan High School when his coach told him if he had any chance to play varsity, he’d need to work on his game over the summer.

In a moment of serendipity, he opened up the Salisbury Post when he got home that evening and saw an ad for a basketball camp at Campbell College. The ad called it the best camp in the country with coaches like John Wooden and pros like Campbell’s own George Lehmann.

Pete Maravich — “Pistol Pete” himself — would be putting on a Friday clinic at this camp.

“That sealed the deal for me,” said Houston.

“Pete had been my hero for years. I even tried to emulate him with the long hair, floppy socks and no-look passes. I hounded my parents every day until they finally gave in and let me have the entry fee.”

That summer, Pete had just finished his second season in the NBA with the Atlanta Hawks, already averaging just over 20 points a game. Where Maravich had already made his name, however, was college at Louisiana State. There, he averaged 44 points a game in his four seasons — this was before the advent of the three-point line — becoming the NCAA’s all-time scoring leader (a title he still owns today).

But beyond his scoring prowess, Pete was a showman. The Basketball Hall of Fame cited him as “perhaps the greatest creative offensive talent in history,” and he’s widely considered the greatest ball-handler of all time. 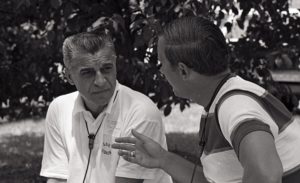 Friday, the day of Pete’s clinic, couldn’t come fast enough for Houston and his friends at the week-long Campbell camp in ‘72. They skipped breakfast that morning to get a good spot in Carter Gym to watch his hero’s clinic. Pete entered the gym wearing sunglasses and a warm-up suit. Then, the show began.

“The fingertip figure-eight dribble drill was performed right in front of me,” Houston said. “He said that the ball would play a song as he dribbled it. The ball was so close to the ground and moving so quick that it seemed impossible. He ended his performance by spinning the ball on his finger, bouncing it off his head for a bank shot into the hoop. I had died and gone to Heaven.”

It began in the late 1950s when a pre-teen Pete tagged along with his father — Clemson University head coach Press Maravich — for his trips north to Campbell College to help his friend Fred McCall run the now famous Campbell Basketball School. Pete joined the other kids while his father coached, and his talent was obvious early on.

“He used to shoot for Pepsis against [Wake Forest star] Len Chappell, betting he could swish 24 of 25 free throws,” said Stan Cole, Campbell’s sports information director. “Not just make them, swish them. Nothing but net. And yeah, he won the bet. He won a lot of Pepsi as a kid.”

Pete was one of the few kids not in college (he wasn’t even in high school) allowed to take part in the epic counselor games at night.

“I saw him do things at Campbell I didn’t think anybody could do,” Coach Wooden told author Mark Kriegel in his book, ‘Pistol: The Life of Pete Maravich.’ “I had the great pleasure of playing against the New York Rens many times. I watched the Globetrotters with Goose Tatum and Marques Haynes. None of them could do more than Pete. Pete Maravich could do more with a basketball than anybody I had ever seen.”

According to Kriegel, the glitz of Pete’s game also worried Wooden, who once asked Press if the kid would be better off learning proper footwork for defense.

“You don’t understand,” Press told him. “He’s going to be the first million-dollar pro.”

Press Maravich is remembered by most as Pete’s father, but he made a name for himself in the high school and college coaching ranks long before Pete’s rocket to stardom. He served in the Naval Air Corps during World War II and played a few years of pro ball for the Youngstown Bears and Pittsburgh Ironmen shortly after the war. He earned his first head coaching job for West Virginia Wesleyan at the age of 34 and a year later, coached at his alma mater, Davis & Elkins.

After two short stints coaching high school from ‘52 to ‘56, Press was called in to turn around the worst basketball program in the ACC, Clemson, which had gone 1-39 in conference play the previous three seasons. In his six seasons, the Tigers slowly climbed back to respectability before he left after the ‘62 season to coach at N.C. State. He’d later go on to coach Pete at LSU and Appalachian State in the 70s. His career ended as an assistant at Campbell in the early 80s.

It was during his time at Clemson and N.C. State when Press first got involved in Campbell Basketball School at the urging of Fred McCall. He roomed with John Wooden — forming a real-life “Odd Couple” with Wooden as the Bible-toting, scripture- quoting adult and Press the over-cussing, beer-drinking sidekick.

But the relationship worked, and as Wooden told Kriegel for his book, “Pistol,” the game’s greatest coach of all time would often turn to his friend for basketball advice, despite Press’ career 234-289 coaching record in the college ranks.

“One should never underestimate Press’ knowledge of the game,” Wooden was quoted. “Over the years, he was the one I would go to for analysis on several aspects of the game.”

And like McCall, who turned down bigger jobs to stay at Campbell, and Wooden, who once had plans to move to Keith Hills after retirement, Press fell in love with Buies Creek. He instructed at the Basketball School nearly every year from the early 60s until his death in 1985.

“He was a fixture there,” said Scott Colclough, former camper and instructor and now an assistant dean at Middle Tennessee State. “He was so entertaining, and he had a personality as big as life. He enjoyed all the coaches and working with the kids. And he was always so proud of his children. He did everything for them.” 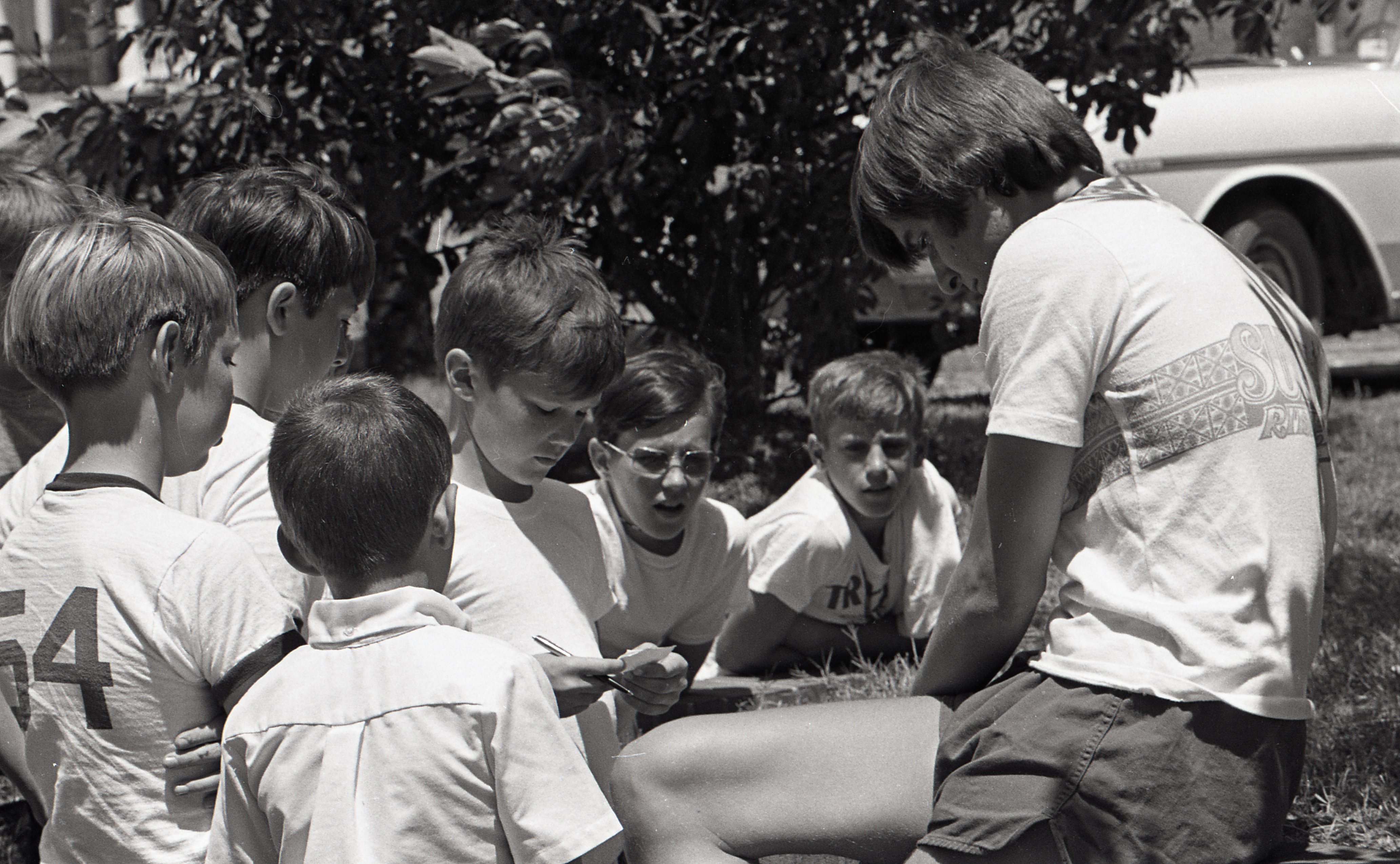 Press’ return to Campbell was contingent on one thing — he and his daughter (Pete’s little sister), Diana, were a “package deal.” Diana enrolled as a freshman, and Press became the associate basketball coach in the fall of 1982.

Three years later, Press was diagnosed with prostate cancer. He died in 1987 in a hospital in Covington, Louisiana.

Pete — a five-time NBA All-Star and one- time NBA scoring champion whose number would be retired by LSU, the Utah Jazz and the New Orleans Pelicans — played in the NBA for 10 seasons before knee problems forced his retirement in 1980. He died suddenly in 1988 (just nine months after Press) from a rare natural heart defect at the age of 40.

A year later, Diana Maravich-May graduated with the charter class of Campbell’s School of Pharmacy.

LSU’s basketball arena today is the Pete Maravich Assembly Center. The Maravich name lives on at Campbell, too, through people like Fred Whitfield, president of the Charlotte Hornets who got there because of sound career advice from Press, who told him he was “too smart” to be a coach.

And through people like Rick Houston, who was wowed as a young camper and who would one day break out the old VHS Pistol Pete fundamental tapes for his son, Nick, a senior guard at Catawba College.

“Pete’s impact helped me understand the work ethic that I needed to become a better player,” Houston said. “My son has grown to almost the same build and height as Pete, and it’s amazing to see the similarities in his jump shot. I will never forget the glimpse of greatness.”

His lasting memory of Pete is the way he ended his clinic on that glorious Friday in Buies Creek.

“He spun the ball on his finger, bounced it with his hand, bounced it from his knee into the air, then banked it [into the goal] using his head,” he said. “Then he was gone. To huge applause.”