It was a hotter-than-usual day for mid- May, which meant Carter Gym would be unbearable, despite the open windows and three large floor fans going full speed.

“Oh, it got way worse than this,” Danny Roberts said, dismissing the trapped heat inside the 60-year-old relic still standing with much newer buildings on Campbell’s campus. 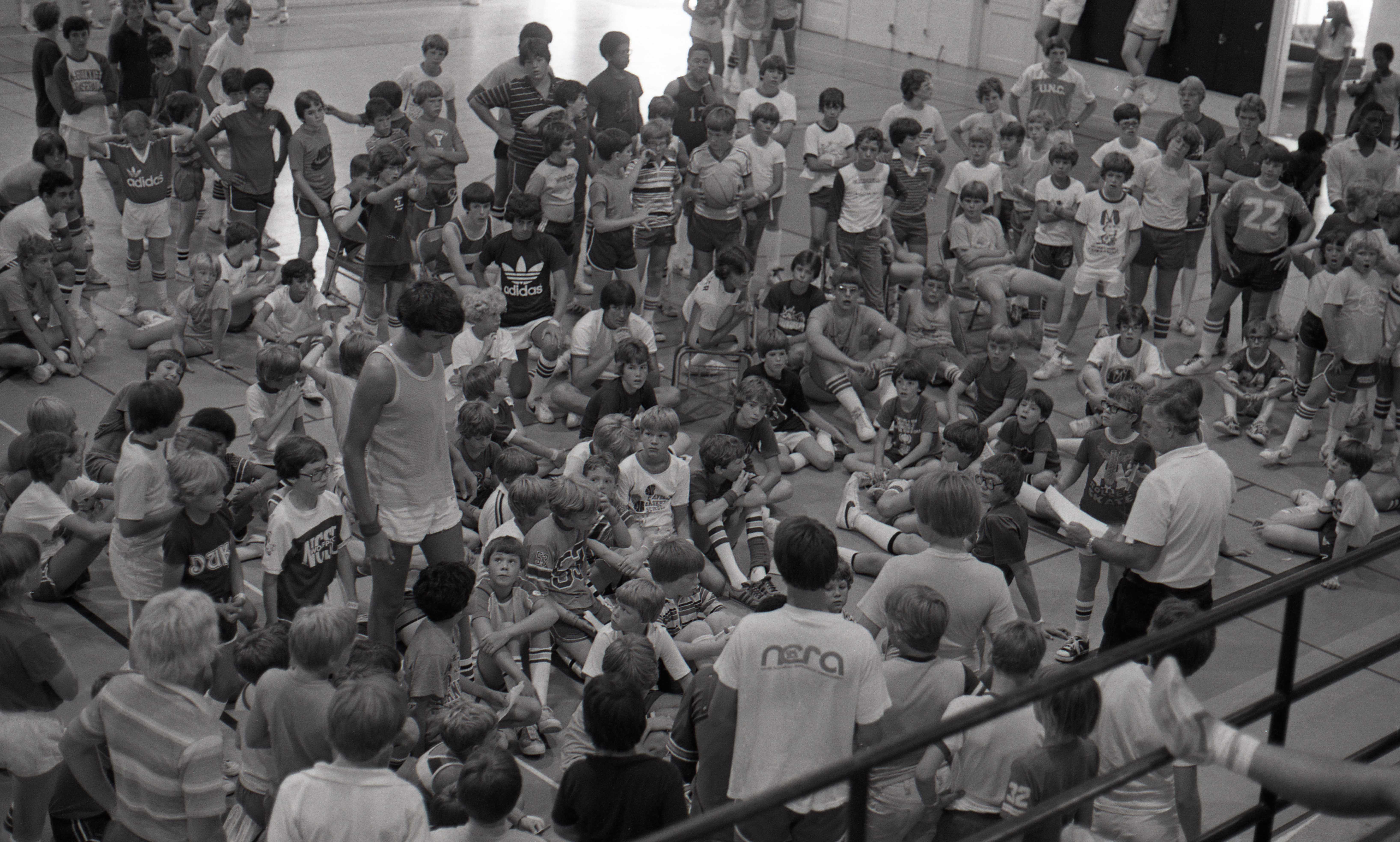 The man who took over for the legendary Fred McCall in 1969 and led the ‘77 squad to the NAIA National Championship game was standing at the free-throw line — the one just feet away from the tiny arena’s entrance — when a smile appeared as he launched into a story about “Pistol Pete” Maravich and the miracles he once performed on this court.

“He’d point to a spot down there,” he said, pointing to the baseline at the far end of the gym, “and toss it behind his back … hitting the spot every time.”

Then there was the time Pete was surrounded by adoring kids after one of his famous clinics, and in an effort to escape the crowd, tossed a ball behind him from that same spot, swishing it at the far end. By the time the campers, jaws accordingly dropped, turned back around to offer praise to their basketball idol, Pete was out the door.

The stories came one after another. The time Dean Smith spoke here. How the entire gym went silent when John Wooden spoke. The time Davidson coach Bo Brickels and a counselor kicked each other in the groin during a 1-on-1 game one night.

“That was hilarious,” Roberts laughed.

The tiny gym, which held just 947 fans when Campbell added seat backs to the metal bleachers in the 90s, was once the second-smallest Division I men’s basketball arena in the nation. That the un-air conditioned, two-bathroom facility remained the home for Camel Basketball until 2008 (when the superior-in-every- way Pope Convocation Center was built) is almost unbelievable today.

“It opened in ‘53 and was obsolete by ‘61,” said Stan Cole, Campbell’s sports information director of the last 25 years and resident Camel Athletics historian.

“We called it ‘The Hot Box,’” recalled Fred Whitfield, president and chief operating officer of the Charlotte Hornets and Campbell Basketball School alum and instructor. “It was unbearable. Even with all the windows open, if you were a counselor there during the day, you could barely stand it. It was a great environment, don’t get me wrong. But it was flaming hot. As hot as you can imagine.”

It was also small. From baseline to baseline, the court in Carter Gym is 4 feet shorter than a regulation court. Those baselines are about a step and a half away from the concrete wall on one side and steel railing for the bleachers on the other. The two bathrooms (with a combined four toilets) meant fans either had to go before or after the game or wait in lines that would reach almost to Carrie Rich Library on nights when the house was rockin’. 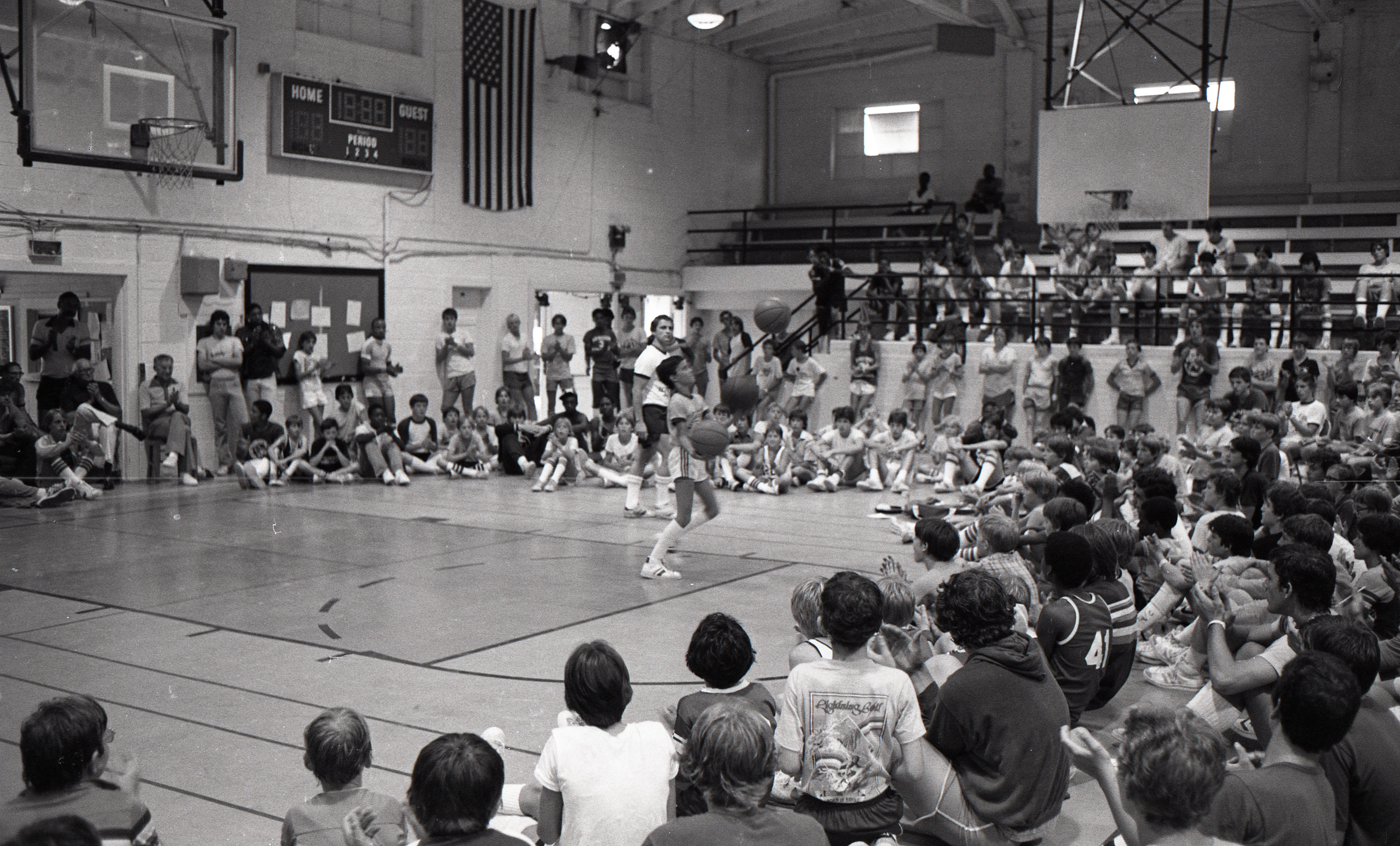 And, boy, did it rock, recalled Cole.

“To have a thousand people in here going crazy when we beat someone like Radford or another conference opponent … you couldn’t hear yourself think,” he said. “I remember in [Coach Robbie} Laing’s third year we ran UNC-Wilmington out of the building, scoring 100 on them. We had people standing outside for hours before that game making sure they could get a seat. You could hear this place all the way across campus on those nights.”

Carter Gym was barely 3 years old when McCall hosted his first basketball school with seven other coaches and 150 boys spread
out over two weeks. The building was a gem compared to the other two facilities McCall used to rotate the boys that first year — the “old gymnasium” near D. Rich Hall and the high school gym in Lillington, about five miles down the road.

Over the years, as the camp grew to 800 boys by the 1960s and nearly 2,000 in the late 70s/early 80s, the staff added more schools to the rotation — Angier, Erwin, Dunn, Lafayette, Bunnlevel to name a few. Carter Gym, however, remained the focal point. It’s where everyone’s favorite fundamental — shooting — was taught every year. It’s where Pete Maravich would put on his epic clinics to standing-room-only crowds.

And it’s where those legendary late-night counselor games would take place, also to a packed house, though these fans were often members of the community or basketball fans who didn’t mind the drive to Buies Creek to see the nation’s best young athletes play for nothing but the love of the sport.

“I was a student here from ‘92 to ‘97, and they were a big deal even then,” said Andy Shell, director of campus recreation at Campbell who today occupies an office at the entrance of Carter Gym, one of only a few rooms in the building with air conditioning. “But I’d heard the stories from people here in the 80s. You had James Worthy, Michael Jordan, Ralph Sampson — there were games on this floor that were better than any you’d see on TV. There was barely room to stand in here those nights. It was amazing.”

“It was unbearable. Even with all the windows open, if you were a counselor there during the day, you could barely stand it. It was a great environment, don’t get me wrong. But it was flaming hot. As hot as you can imagine.” 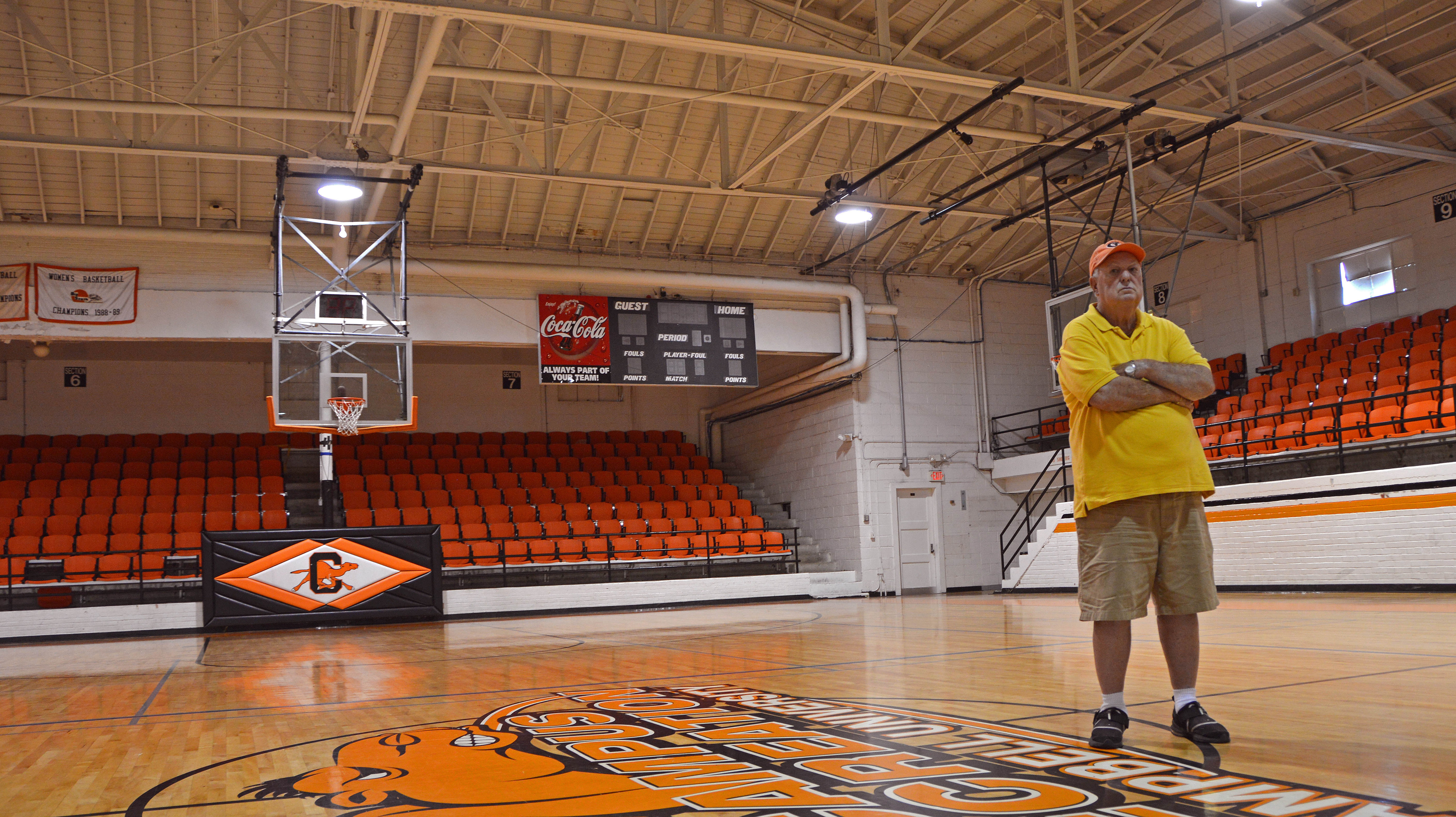 When Carter Gym gave way to the convocation center and Gore Arena in 2008, university officials decided it still had use as the home for campus recreation. It serves other purposes as well — the community Christmas Store is housed there every November for less fortunate families to pick out toys to put under their trees. In June, when the camp would be running at full speed in the past, Centrikid Christian camps use Carter for some of their physical activities. And new wrestling coach and former U.S. Olympian Cary Kolat has used Carter for some of his home matches recently because he likes the more intimate feel it provides over the more spacious convocation center.

When you factor in the building’s history — home of the nation’s first basketball camp, host to the biggest names in basketball and even home to the longest basketball game in U.S. history (a 13-overtime high school game back in 1965) — Carter Gym deserves to stick around, according to Cole.

“You could see one of those gray historical markers out there on Main Street,” he said. “I don’t know how you’d edit down the two sentences on that sign, though. So much has happened here. If something were to ever happen to this building, at least people would know how special it was.”

Not that there are plans to make room for a bigger and more modern building, said Shell. He’s heard rumblings of renovations in the past. There was talk of a drop-down ceiling to properly air-condition the court. Cole said they once discussed a throw-back game, much like N.C. State does with old Reynolds Coliseum, but the “fixes” needed to support just one game — the wiring updates alone would take days — make it unlikely.

“When they said they were considering tearing down Kivett Hall, there was an uproar,” said Shell. “That’s nothing compared to what would happen if people heard Carter was going away. You have several generations who have so many wonderful memories of this place. For three weeks in June for over 50 years, this was the place to be.”

“We’d get that place so full, all the seats would be taken. Kids would have to lie down on the court to watch the clinics or the all-star games. it was quite an atmosphere. I’ll never forget it.”