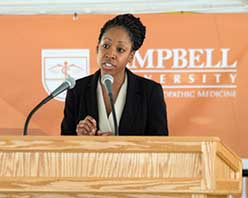 A governor, a millionaire philanthropist, doctors and a few elected officials all spoke during the ceremonial ribbon-cutting event for the Leon Levine Hall of Medical Sciences on Sept. 19. But perhaps the biggest impression on the crowd that day was left by a physician assistant student who will graduate in December.

Andrita Stokes represented the charter physician assistant class by sharing a personal story with the 700-plus gathered that day. She spoke of the many rejection letters she received before her acceptance into Campbell’s new program.

“It wasn’t because of my capabilities or because I couldn’t meet the demands of the rigorous program, but it was because it took a school like Campbell University to recognize and celebrate the total person,” said Stokes, “… one with an engineering degree and a biology degree. A wife, a mother and a woman with a strong faith and morals who represents the true essence of what it means to be Campbell Proud. It was [Campbell] where my dream came to fruition. It was within these walls that I was pushed to the limit to be and do my best and be the best physician assistant that I can be.”

After the ceremony, Stokes elaborated on her history pre-Campbell and likened the events leading up to her applying for the PA program to an Olympic track event.

“Along the way, there were various forms of preparation, hurdles to clear, wins and losses. It was no easy road,” she said. “I’d spent multiple years attempting to get into multiple PA programs. Rejection letters and waitlists were the bane of my existence for a few years.Then, there was a year when the acceptance letters finally started coming. It was like finding that golden ticket in the Willy Wonka chocolate bar. Then, I was faced with the decision to choose.”

Stokes chose Campbell, she said, because of its reputation — its pharmacy, law and other graduate schools “reigned supreme” and she was confident the PA program would follow the same model of success.

“I remember attending an open house prior to being interviewed for a seat in the charter class and during my visit, I felt at home,” she said. “In a sense, I chose Campbell because it fit me like a well-tailored suit. I wanted a school that saw the whole me and embraced it — varied educational and work experience as well as life experience.”

Two years and a few months later, she calls her time at Campbell an “indescribable experience.”

“Though my race is nearing its end, I know that choosing to attend Campbell was undoubtedly the right choice and one of the best decisions I’ve made,” she said. “Whether I finish first or last in this race, I will be always be a Campbell PA.”

If the Sept. 19 ribbon-cutting ceremony for the Leon Levine Hall of Medical Sciences — Campbell University’s 96,500-square-foot cornerstone of its new health sciences campus — took on a church-like atmosphere, it wasn’t by accident.

From the organist’s hymnal that accompanied the march-in of 200-plus medical school and physician assistant students to the large white tent set up outside of the facility that gave the program a “big top revival” feel — and from the several speakers who spoke passionately about how “God’s will” played a big part in Campbell’s decision to launch North Carolina’s first new medical school in 35 years to the scriptures offered by President Jerry Wallace to both open and close the ceremony — faith was the underlying theme on a day celebrated by more than 700 people in attendance.

In addition to the students, faculty and staff who had resided in the medical building for a few months, the big day’s crowd included university trustees and committee members, donors, local and state elected officials, state medical officials and North Carolina Gov. Pat McCrory, who spoke before the ceremonial cutting of the ribbon about the importance of Campbell’s health sciences initiative to the state in terms of both health care and the economy.

McCrory said his first introduction to Campbell as a young man was the school’s basketball camps that brought in the likes of legends John Wooden and Michael Jordan. Those camps were the first of their kind, and he compared Campbell’s foresight then to its goal today of helping a state that currently ranks 35th in the nation in physicians per capita and has at least 20 counties with no obstetrician or gynecologist, a factor in high infant mortality rates in those areas.

“From your law school that has had the highest [bar exam] rates in North Carolina to a medical school today, this is visionary leadership,” McCrory said. “Unless we convince doctors and those in the medical profession to make their home in North Carolina, we’re not going to succeed in rebuilding the rural areas of our state. This is what our state needs, and Campbell University is giving North Carolina what it needs.”

After the ceremony, McCrory added to his praise of Campbell.

“I’m impressed with the way this university has adapted to market needs,” he said. “That’s something I’ve been trying to promote to our state’s public universities. There’s a large number of students looking to enter medical school, and our state is in desperate need of a large number of doctors. Unless we have doctors or other medical professionals in these underserved parts of our state, those towns simply won’t be able to recruit businesses. What Campbell is doing will do wonders for economic development in those areas.”

Honored during the ceremony was Charlotte businessman, philanthropist and longtime friend of Wallace, Leon Levine, for whom the medical facility is named. The Family Dollar retail chain founder whose foundation has donated more than $100 million in the last 30-plus years called the ribbon-cutting event a “proud day” and expressed his joy in helping Campbell meet the state’s needs.

“For a long time, my foundation has had a deep interest in providing quality health care for all,” Levine said. “Without top-notch physicians, physician assistants and other health care professionals, we cannot even begin to solve this critical challenge. Campbell will go a long way in dealing with the challenges in rural North Carolina.”

In addition to greetings and speeches from several elected officials and representatives of both the university and medical industry, two students took the stage to represent the charter physician assistant class of 2013 and the School of Osteopathic Medicine class of 2017. First-year med student Melissa Davies, who received her undergraduate degree from Campbell in 2010, credited her classmates for working together as a team during their first month of med school.

“We have formed a community,” she said. “Instead of the usual competitive mentality found in medical school, here one will find cooperation and teamwork.”

“Coupling faith with medical training may seem contradictory to some, but it is actually enhancing the way we will practice medicine and care for our patients,” she said.

Med student Ryan Pursley of Connecticut was helping his group through a demonstration of a 3D virtual reality program that guides students through operations and other nerve procedures. With medical “instruments” in hand, the students can poke and prod (for lack of a better medical term) virtual patients, and the machine provides resistance to make the experience “real.”

In between tour stops, Pursley talked about his first month of medical school.

“Nothing but fear,” Pursley said with a laugh. “But it’s really been a wonderful experience. The work load has been everything you’d expect from med school, so there’s been stress. But overall, the facilities have been great, and the faculty and staff have been amazing.”

Student Kimberly Imhoff, another Campbell alumna, said the physician assistant program has been equally demanding, but also a “wonderful experience.” She also raved about the star of the ceremony, the facility.

“The study rooms are beautiful and well-equipped with large computer screens, which is great because we can connect our laptops to them and study together,” Imhoff said.

The ribbon-cutting ceremony came 22 months after the groundbreaking event under a similar white tent on what was then a bare pasture where Levine Hall now stands. In December, Campbell will graduate its first class of nearly 40 physician assistants, and the 162-member charter class of the School of Osteopathic Medicine is scheduled to graduate in May 2017.

By 2020, Campbell will have graduated approximately 1,000 students between the two programs. In addition, the university continues to graduate pharmacists and clinical researchers and is currently seeking accreditation to begin physical therapy and nursing programs.

The Sept. 19 ribbon cutting and building dedication ceremony for the Leon Levine Hall of Medical Sciences on Campbell University’s Health Science Campus featured speeches by about 20 people, including elected officials, medical professionals, Campbell University administrators, faculty and students with the university’s School of Osteopathic Medicine and physician assistant program. Below are quotes from a few of those speeches:

“For a long time my foundation has had a deep interest in providing quality health care for all. Without top-notch physicians, physician assistants, and other health care professionals we can’t begin to solve this critical challenge. Campbell’s plan to graduate 150 or more physicians and 40 physician assistants per year will go a long way in dealing with this challenging issue, especially right here in rural North Carolina.”
—Leon Levine, The Leon Levine Foundation and Founder and Chair Emeritus of Family Dollar Stores, Inc.

“I have to be honest. When Dr. Wallace and Dr. Davis came in to my office about four years ago and told me about their idea for a medical school, I didn’t believe it. And now it’s payback. Every time I see that commercial with the camel going through the office . . . all I see is that camel saying, ‘We told you so. We told you so.’ I’m glad I was wrong.”
— Robert W. Seligson, Executive VP and CEO of N.C. Medical Society

“We have a dream for a healthy North Carolina, and our dream is that every North Carolinian — particularly those most vulnerable, particularly those in rural communities — all will have easy access to high-quality primary care. We have a dream that North Carolina will someday have the problem of being overwhelmed with primary care physicians. The opening of this school helps us get one step closer to our dream come true.”
—Dr. Karen McNeil-Miller, President of Kate B. Reynolds Charitable Trust