When David Gray discusses and analyzes with his students the recent rise of ISIS — a former Al Qaeda splinter group whose aim is to create an Islamic state across Sunni areas of Iraq and Syria — those students know they’re getting much better insight than most of what they see or read on the news or in the papers.

Current events play a big role in homeland security courses at Campbell, which became the first university in North Carolina to offer a four-year bachelor’s degree in the field in 2013. When the program made the jump from concentration to major that spring, the Boston Marathon bombing was the hot topic in Gray’s courses on terrorism and intelligence.

This fall, a lot of time has been spent on ISIS, the media savvy terrorist group best known in the West for its mass killings, public executions and most recently, videos of American and British hostages before and after their death by beheading. ISIS currently controls hundreds of square miles throughout Syria and Iraq, ignoring borders and laws.

The group, born following the fall of Saddam Hussein and currently numbering in the tens of thousands, has wreaked havoc on the U.S.-trained Iraqi Army. The U.S. has countered with air strikes while sticking to President Obama’s plan to reduce the number of ground troops in Iraq and Afghanistan after years of fighting in the Middle East.

Gray’s courses go beyond the facts about ISIS and other terrorist groups, both international and domestic — and call on students to analyze the groups’ agendas, their ultimate goals and the United States’ response to their existence.

“The question that is at the heart of the issue when analyzing any terrorist group is ‘Why?’” says Gray. “Why do they exist? Almost always, it’s political. Terrorists are rarely after a religious objective or anti-U.S. agenda. Look at ISIS. They want an independent state. That’s what the IRA wanted in Northern Ireland. If people don’t understand that, they’re missing the point of these organizations.”

The beheadings, he adds, are ISIS’ attempt to stop U.S. air strikes. The way they’re presented — hostages on their knees in orange jump suits (reminiscent of the outfits worn by prisoners at Guantanamo Bay), a masked terrorist with a British accent, the actual beheadings being cut from the video (showing only an “after” image in most cases) — the videos are produced with U.S. and British audiences in mind. By not showing the murder itself, the chances of the video getting wide circulation increase.

“If they do enough of these, they think it will drive the public in these Western countries to put pressure on their leadership to stop the air attacks,” Gray says. “Stopping these air strikes is their only chance. If the U.S. sends ground troops, ISIS then has human targets, and they know they have a chance to manipulate public perception with each troop killed.”

For homeland security majors at Campbell, ISIS and terrorism are more than mere classroom discussions and test material. Many are being trained for careers in national security, intelligence and corporate security fields. Others will pursue careers in local, state or national governmental organizations and law enforcement. During their four years, they’ll travel to places like the North Carolina Justice Academy, State Bureau of Investigations and Fort Bragg and will attend Model United Nations events and be asked to publish original work via online journals.

In other words, knowing the behaviors and history of those perceived to be a threat to the United States could get their foot into the door of a hiring agency after college and could very well one day save lives.

“What we’re studying today in class may be what we have to deal with in uniform four years from now,” says Josh Duke, a Camp Lejeune freshman homeland security major and first-year cadet in Campbell’s nationally renowned Army ROTC program. “You read about ISIS and what’s happening in North Korea in the news, and right now it’s simply a classroom discussion. Four years from now, when I’m in uniform, [ISIS] could be the enemy. [The major] has huge value for me.”

And learning from professors like Gray; Amanda Parker, an expert in transnational terrorism trends and cyberterrorism; Salvatore Mercogliano, who has a Ph.D. in military and naval history; John Mero, an expert in American governmental institutions and public administration; and John Combs, who has over 26 years of law enforcement experience; Duke says the faculty’s experience goes a long way in helping students better understand the subject matter.

“Turkey is attacking the Kurds, and we ask what it’s all about. Why is something like that happening? Someone like Professor Gray who is experienced and has been to these places and experienced these cultures — it adds concrete value to the class,” Duke says.

A lot of writing and public speaking is expected in Gray’s classes. Instead of just learning facts and history on terrorist groups, Gray’s students are asked to write papers about their thoughts on their country’s actions pertaining to those groups. They’re analyzing the effectiveness of a group like ISIS, which has taken to social media for recruitment and fear-mongering like no other terrorist organization before it. Case in point — ISIS draws in unexpecting eyes with Twitter hashtags, using #worldcup earlier this year to post the aftermath of a beheading (with the words, “This is our football. It’s made of skin.”)

“I expect my students to think critically about what’s discussed in our class,” Gray says. “The key is having them write. There’s a big difference between just talking, memorizing and writing down your thoughts. It encourages good thinking. I ran into one of my students and her family at a recent football game, and her parents were happy she was watching the 6 o’clock news. I think that’s great … that’s the point of what we’re trying to teach.” 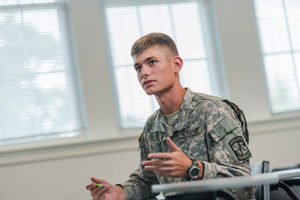 “What we’re studying today in class may be what we have to deal with in uniform four years from now.”

TOOLS OF THE TRADE

Homeland students at Campbell aren’t just learning from experienced faculty; they’re using many of the same tools government agencies use on a daily basis.

One software program Gray is particularly excited about is called the Analyst’s Notebook, which can take in massive amounts of information collected by government agencies and quickly turn that data into a single, cohesive picture to help identify, predict, prevent or disrupt criminal, terrorist or fraudulent behaviors. Gray shows its effectiveness by flowing in Excel sheets with hundreds of drug arrests and immediately producing heirarchy maps showing high- and low-level dealers, their locations and the methods based on arrest records.

“The CIA, FBI, SBI are all using this program,” Gray says. “Our students will enter the workforce with important experience on software like this.”

They’re also flying drones throughout the campus, and not for recreation. For a recent assignment, students recorded drone footage of the entire campus to analyze what upgrades in campus security would benefit the University most.

“From the video and photos, we see some areas that could use increased lighting, possibly a fence or gate or another security guard,” Gray says. “We were recently shooting footage at a football game, and we had state troopers and Harnett County deputies come over to check out what we were doing. They thought it was great … very useful. We asked them to come by anytime to show them more.”

Gray is eager to get the word out on the program, its faculty and all the “toys” being used by high-level government agencies. About 50 students declared homeland security their major when the four-year degree program launched in spring 2013, and enrollment continues to rise. To earn their degree, homeland students must complete seven courses — National and International Security, Homeland Security,
Emergency Preparedness and Response, Critical Infrastructure Protection, Terrorism, Intelligence and National Security, and Interagency Operations — plus an internship and a senior seminar in homeland security, two courses in their concentration (terrorism or intelligence), basic courses and a foreign language through the 201 level.

The curriculum is based on the national strategy for homeland security and the Homeland Security and Defense Education Consortium Association.

“The courses we offer aren’t the result of someone just falling out of bed and saying they want to teach a class on terrorism,” Gray joked. “They’re benchmarked on national and homeland security standards. This is not a high school civics program.”