Since she was an infant, junior Kaylin Yost has faced one hardship after another. But that hasn’t stopped her from becoming one of the top golfers in the Big South conference.

During her second golf tournament this season, Kaylin Yost, a junior on Campbell University’s women’s golf team, shot an 81 in the second round. She had scored a 75 in the first round on the 72-par Fazio Course at the Red Sky Ranch and Golf Club in Wolcott, Col. So hitting an 81 in a round? Not good.

Her parents couldn’t make the trip to watch her compete at the Golfweek Conference Championship that September, so she called them after her second round. For about an hour and a half, she sobbed over the phone to her father, Tom.

Her father listened. Then he told her: “You’ve always been a fighter. Keep fighting.”

The next day Yost shot the lowest score of the final round — a 67 — matching her collegiate low and helping the Fighting Camels finish fourth in the 18-team tournament.

That turnaround, Yost says, is the perfect example of how her parents have taught her how to approach golf and life: “Never give up, because the next day can always be better.”

Her parents have been telling her that since she can remember.

Yost was born with dislocated hips. Doctors told her parents that she would never be able to walk. As an infant, she underwent two major surgeries and spent the first 16 months of her life in a full-body cast. When she was 2, she lost nearly all of her hearing. Doctors still don’t know why.

But, as her parents have told her, miracles do happen. Yost eventually did learn to walk. And today, she’s the reigning 2012 Big South Women’s Golfer of the Year and a key member of a deep Camels squad that has been ranked as high as No. 17 in the nation this season.

“Kaylin has always had to deal with things that other people haven’t had to deal with,” says John Crooks, coach of the men’s and women’s golf programs at Campbell. “And she has been able to succeed in spite of those things.”

Yost took up golf when she was 9, following in the footsteps of her grandfather, father and brother. She liked the challenge of trying to beat them, especially her brother, Alex. “I think that made me competitive,” she says.

When she was in the sixth grade, Yost began playing on the varsity team at Heritage High School in Palm Bay, Fla., putting her in a position to gain experience competing against higher-level players at a young age. But it was only when she was a senior that she realized she might be good enough to play in college. She had hit a round of 65 at a local tournament and beaten competitors for the first time who had routinely beaten her before. “That was the moment when I said, ‘OK, I might be pretty good,’” she says.

It was also her senior year when Crooks spotted her playing in a local tournament in Florida. “At the high-school level, you look for what this person can do that others can’t. Can she hit further? Does she have good fundamentals? Kaylin was a person who fit those criteria,” says Crooks, who has the second most tournament coaching victories among active coaches in NCAA Division 1.

Yost chose to attend Campbell because of Crooks and the solid program he had built. Campbell was also a small Christian school, she says, and she needed to be at a place where she would have smaller classes.

“Life isn’t always going to be what you want it to be. But if you work hard and look on the brighter side, things will work out for the better.”

Because of her hearing impairment, Yost wears hearing aids, which can present challenges in the classroom. She doesn’t hear everything, and she writes like she hears, meaning she often leaves out words or misspells them when she’s taking notes or completing assignments.

“Some people will tell me that I have a disability, but my hearing impairment is something that God has given me,” says Yost, who sits on the first row of every class and was named to the Big South All-Academic team last season. “I’ve been wearing hearing aids all my life, and my family looks at them as a huge advantage.”

That advantage especially comes through on the golf course, Yost says. Before every swing or putt, she turns off her hearing aids. This helps her focus and tune out distractions. “I’ve been doing it for so long that I don’t remember when I started doing it,” she says. 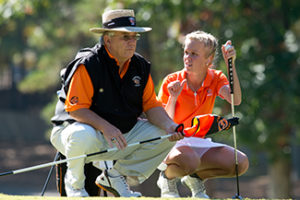 Yost hopes this spring that she can help her team to the NCAA Division 1 Championships, which will be held May 21-24. To do that, they must finish in the Top 8 at the regionals held May 9-11. The program finished 10th at regionals last year.

After she graduates next spring, Yost plans to return to Florida, start playing in small tournaments and try to earn a spot on the Futures Tour — and eventually play her way on to the LPGA Tour. She might even try to land a spot on “The Big Break,” Golf Channel’s reality TV show that awards players tour exemptions. If playing at a higher level doesn’t work out, she hopes to stay involved in the game somehow, perhaps working for a golf company. “It wasn’t until I came to Campbell and played for Coach Crooks that I realized how much I enjoy and love the game of golf, and how much I want it to always be part of my life,” says Yost, a communication studies major. “It is my passion.”

Realizing that wasn’t immediate, though. During her first semester at Campbell, Yost thought she and Crooks might not be a good fit for each other as player and coach. Yost says she was “so optimistic” that when she’d hit an 81 in a round as a freshman, she’d shrug it off and say, “It’s OK.” Crooks would tell her, “Look, an 81 isn’t going to cut it.”

Yost spent her winter break her freshman year contemplating leaving Campbell. Then she and Crooks sat down for a long conversation. Crooks didn’t want Yost to lose her optimism, he told her, but a little realism when it was needed wouldn’t hurt either. They both had the same goal, he said, for Yost to become the best player and the best person that she could be. Sometimes that means admitting “something isn’t working out and figuring out a way to do something better,” Crooks told her.

Yost realized, she says, that Crooks “was not there to go against me but there to help me.” 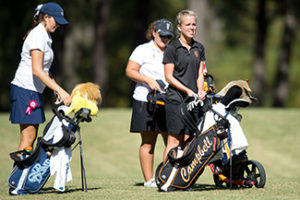 Her game went on to blossom. She was named to the Atlantic Sun Conference All-Freshman team, and the following season was named the 2012 Big South Conference Player of the Year and Campbell’s Female Athlete of the Year.

“Life isn’t always going to be what you want it to be,” Yost says. “But if you work hard and look on the brighter side, things will work out for the better.”

John Crooks says he has coached a lot of good women’s golf teams at Campbell University. But he doesn’t think he has ever had as many good players on one team than he does this season. The women’s golf team ended the 2012 fall season ranked No. 26 in the nation – the program’s highest ever ranking at the end of the fall season. The squad had been ranked as high as No. 17 earlier in the year.

“There are nine players, and any one of them has been the best one on the team on any particular day,” says Crooks, who has coached the women’s golf team at Campbell since 1991.

At one point during the season, six Campbell golfers were also ranked in the Top 200 of Golfstat Cup’s national ratings: Bellomy, Benavides, Urquizu, Yost and sophomore Lisbeth Brooks and freshman Tahnia Ravnjak.

“We have some incredible talent on this team,” Crooks says. “History will tell us just how good this team can be.”