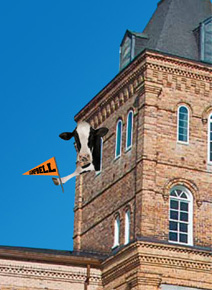 Did you know Kivett Hall once housed dozens of bats? Enjoy our first edition of 10 Things You Didn’t Know About…

If you know even just a little about Campbell University’s history, you know that Kivett Hall, the school’s most iconic building, literally rose from the ashes in 1903. Almost three years prior, then-Buies Creek Academy was nearly completely destroyed by a fire, and Kivett — considered an over-ambitious and overly expensive project by many at the time – was the result of Dr. J.A. Campbell’s plan to make the school stronger.

But there’s much about the 109-year-old building you may not know. We rummaged the history books to offer 10 little-known facts about Campbell’s beloved Kivett Hall and its founder. Amaze your friends with your newfound knowledge…

1. The building was named for Zachary Kivett, a self-taught architect and structural engineer, who funded the first phase of the project by asking students, teachers and others in the community to pitch in at least $5 each. One of his most ardent supporters was Josephus Daniels, former publisher of the Raleigh News & Observer and Secretary of the Navy during WWI under President Woodrow Wilson.

2. Legend has it that a huge storm in 1901 washed away Kivett’s ferry, which he used to transport lumber across the Cape Fear River to the construction site. The storm, however, also brought to Kivett a flotsam that included a sawmill buoyed by its own timber carriage and boiler. Kivett lassoed in the “free wood,” sawed it and used it on the building … calling it a gift from God.

3. Kivett Hall today mostly houses administrative offices and the English Department, but over the years it has served as a grade school and a high school, in addition to its purpose as a home for college classrooms. It was also home to the Norman A. Wiggins School of Law before it moved to Wiggins Hall in the 1990s.

4. The top of Kivett Hall once served as a bell tower. The bell has long been removed, cleaned thoroughly and repainted and is now the bell rung when the football team wins a game at home.

5. In addition to his building, Zachary Kivett is also credited by many for providing the school with the name of its mascot. According to Campbell legend, Kivett once told founder Dr. J.A. Campbell, “Your name’s Campbell, then get a hump on you! We’ve got work to do,” to motivate him after the fire in 1900. Dr. Campbell thought he was told, “You’re a camel, get a hump on you!” … hence, the mascot.

6. In 1956, a few years after Campbell purchased its first fire truck, a fire broke out in the top of Kivett Hall. The fire was held in check by the little Buies Creek truck until reserves from Dunn and Lillington arrived. The lack of damage was credited to “fire walls” (inner brick walls) installed by Kivett during the construction process.

7. One of the more noted pranks involved Kivett Hall in the 1940s. Students liked to lead cows owned by the Campbell family to odd places throughout campus – such as the stage in D. Rich — for fun. In one of the more ambitious pranks, students led a cow up the steps in the tower in Kivett Hall. No cows were hurt in the stunt.

8. When Kivett Hall first housed the new Norman A. Wiggins School of Law in the mid-1970s, founding Dean Leary Davis ordered the installation of very-70s lime green carpet in the classrooms. His reasoning? According to legend, Davis once read lime green was the best color by which to study.

9. Bats in the belfry? Absolutely. Part of the reason the bell needed such a good cleaning before its new purpose was years and years of bat droppings. Dr. Wiggins ordered the closing of all bat entrances during renovations in the 70s, forcing the creatures to find homes along the Cape Fear.

10. In 2006, rumors abounded regarding the closing of Kivett Hall because of a faulty foundation, meaning possible demolition. Students, alumni and faculty protested the idea, and in 2008, construction began to brace the century-old structure. Major renovations continued in 2009 to make the building fit for educational use again.