These are the stereotypes Laura Guzman says are no longer the norm in today’s world of tattoo artistry.

The Raleigh junior is majoring in studio art and graphic design at Campbell University, and upon graduation, she hopes to represent a new breed of tattoo artist — the kind with a four-year degree on the wall next to those art samples.

Guzman spent over six weeks last summer in Watertown, Mass., near Cambridge, working with Holly Azzara of Always and Forever Tattoo to learn the trade. That experience will count toward her studio art internship, making her summer one of the more unique internships the University’s art department has approved, according to Daniel Rodgers, associate professor of art and design.

“I’ll admit, she’s the first one I’ve seen here who’s decided to pursue tattoo art as a career,” said Rodgers. “But if a student is passionate about something, we encourage them to follow through with it.”

Art is certainly a passion for Guzman, 20, the daughter of Campbell Associate Science Professor Dr. Karen Guzman. As a child, she liked “drawing and doodling” more than the average kid, and by elementary school, her teachers and friends were telling her how good she was at it. Soon, art became her favorite subject.

In high school, Guzman entered an art project on diversity in a contest and won.

She’s been involved in several projects at Campbell as well — in 2010, she and classmate Maggie Hopf won honorable mention at the annual Raleigh Street Painting event.

Tattoo art first caught her eye when she turned 16, and she was inked for the first time when she turned 18. Today, Guzman has 12 tattoos ranging in size from small designs to a large band that wraps around her left thigh.

“After getting the first one, I decided I really liked the whole process,” she said. “I went online and looked through magazines to learn more. When I got into it, I started wanting bigger tattoos, and then this past summer, something just clicked that made me want to do this as a career.”

That’s where Azzara came in.

Guzman learned online that Azzara was looking for help over the summer, which gave her the idea to not only learn the trade but get school credit while doing so.

“(Azzara) had never heard of an intern tattoo artist, which isn’t normal in the industry, I guess,” Guzman said. “But I wanted to learn more, and I really liked her studio and her work.”

Once in Massachusetts, Guzman went to work, focusing solely on the “art” side of the industry and not the actual inking of skin. She learned what works and what doesn’t work in tattoos — thick, dark lines hold up over time, whereas pastel colors or thinly drawn lines tend to be bad ideas no matter how good they look on paper.

“It’s important to learn these things before you ever pick up a machine,” said Guzman, who was given a new style to study each week during her internship. “You can do a lot of great things on paper that just don’t work on the skin, even with the better technology.”

By summer’s end, Guzman was given a big project — a six-sheet spread of art done in water color, a medium new to the young artist. Guzman chose a nautical theme for her project and was happy with the result of her hard work.

Azzara was impressed as well, saying Guzman showed a lot of drive in her six weeks at her shop and wasn’t afraid to take constructive criticism or suggestions.

“I think Laura has great potential to go where she wants with her art,” Azzara said. “Her work reminds me a lot of the art I was doing at her age … her approach and how she looks at things. She has a fun, bright and bubbly style, and her work with realism is off to a great start.”

Azzara said once Guzman figures out the basics, she will be able to break into the industry and find her style in no time.

“Art is a never-ending learning and exploring process,” she said. “Once you think you have mastered it, you realize you’ve only just begun. The main requirement is passion, which Laura demonstrated she has.”

Both Guzman and Azzara want to see some of the negative stereotypes concerning tattoo shops and body art in general disappear. Guzman said Azzara’s shop was clean and professionally run. Azzara said having students like Guzman interested in the field can only be a good thing.

“There have been a lot of professionally trained artists coming into tattooing, which is great because it has raised the standards and has opened the eyes to many outside of tattooing that we are also artists in various mediums,” she said. “There are a lot of different people within the tattoo community from a lot of different backgrounds, and I’m sure we will all agree that tattooing is our life, not just our job. I welcome the younger artists as long as they share the passion.”

The summer in Massachusetts only strengthened Guzman’s desire to make it a career.

“I knew I wanted to do this coming in, but this experience just cemented it,” she said. “I feel very much more informed now. I know more about what the tattoo industry is, and I’m excited about it.”

The experience wouldn’t have been possible, she said, were it not for the support of her professors and the art department at Campbell University.

“It’s because of people like Mr. Rodgers being so willing to let me pursue my art goals that I was able to do this and have it count toward my degree,” Guzman said. “I think it was awesome that I was allowed to do that for credit here.

Rodgers said the decision to approve the internship was an easy one, even if it was unique to the department.

“Laura’s very talented, very hard-working and very driven … more so than a lot of students her age,” he said. “She’s one of the lucky (undergrads) in college who already knows what they want to do. And if I can see a student is very serious about a career path, and they’ve proven this to me, I’m not going to hold them back.”

Associate Professor of Art Larkin Tysor said when it comes to students with Guzman’s talent, it’s best to simply guide them in the right direction and not get in the way.

“She’s definitely incredibly talented … a natural,” he said. “She has a very nice intuitive hand when she paints or draws or really in whatever she does.”

Laura Guzman shared her talents to paint the cover of this spring 2012 edition of Campbell Magazine. With a nod to vintage “New Yorker” magazine covers of the past, Guzman painted Kivett Hall – Campbell University’s oldest building – as it appeared in the mid-20th Century. 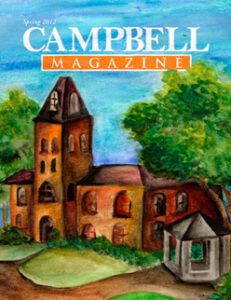