In its third year, the NCICU Ethics Bowl has become a tense, highly competitive battle of morals

By Rachel Davis and Billy Liggett

It’s minutes before Round I of the 2014 N.C. Independent Colleges and Universities Ethics Bowl, and Campbell University’s five-person squad has huddled together in the lobby, surrounded by the 19 other colleges and universities competing, to discuss last-minute strategy.

The subject of nerves is addressed. Despite being the “home team” — this year’s event is hosted by Campbell’s School of Law in downtown Raleigh — this group is made up of five first-timers, their only experience a few exhibition bowls in the months leading up to this one … the big one. “It’s a brand new experience for many of these students, which makes it exciting,” says Adam English, professor of religion at Campbell and, along with Dr. Ken Vandergriff, Campbell’s Ethics Bowl coach.

For Joanna D’Ancona, the idea of thinking on her feet and presenting a case in front of three judges produces the most pre-game butterflies. For Diamond Leggett, it’s performing in front of her peers.

“If the other team is friendly and mingles beforehand, that helps,” says Leggett, a senior biology major. “But the real [intimidation] factor for me is how they look … what they’re wearing. If they’re all dressed alike, they come off as more unified, prepared and professional. They’re all gathered in a group, whispering to each other with a serious demeanor, and here I am on the other side of the room eating a brownie.”

Soon, Leggett and her teammates are ushered into a classroom to face their first-round opponent, Saint Augustine’s University, another Raleigh school. Their six-person team is huddled, whispering and wearing matching blue blazers with their school’s emblem embroidered on it.

At least she’s not eating a brownie.

Think “high school debate team,” but add smarter, more educated students and a list of judges representing some of the state’s best law firms, biggest industries and most accomplished politicians; and you get the idea behind the NCICU Ethics Bowl.

Designed to “emphasize applied ethics as a hallmark of the student experience,” according to the event’s mission statement, the Ethics Bowl is in its third year in North Carolina. Its birth can be traced to Campbell University Vice President for Institutional Advancement and Admissions Britt Davis, who helped launch a similar competition for the Virginia Foundation for Independent Colleges in 1999. Former CBS, PBS and History Channel anchorman Roger Mudd was on the VFIC board at the time, and he pitched the idea of building an event around ethics.

“He knew what it should look like,” Davis recalls. “Then we had the president of the University of Richmond, Bill Cooper, pointing us in the direction of one of his faculty members, Joanne Ciulla, an ethics professor who held these events in her classroom and got faculty members to volunteer as judges. We took her concept and applied it to fifteen colleges.”

Fourteen years later and one state further south, the basic structure and rules are still intact. Two teams are presented a topic, which is then addressed by four selected team members from each. The theme of the 2014 event is “Ethics in Health Care,” and cases involve everything from health care benefits to whether or not physicians should accept money or gifts from drug manufacturers.

“In addition to preparing your point, you have to prepare for whatever your opponents’ argument is going to be,” says English. “The judges are looking at the clarity in your argument and your counter arguments, and they want to see that you have a feel for what the relevant ethical issues are in each case.” A group of three judges grades each team, and the school with the most points at the end is declared the winner. The process is repeated three more times, and the top two schools after those four rounds advance to the finals. High Point University topped Wake Forest in 2013, and both schools are represented in Raleigh at the 2014 event.

“The thing that excites me most is seeing how sharp these students are,” says Vandergriff. “This is not easy. They’re forced to think very quickly on their feet. It’s an exciting thing to see.” 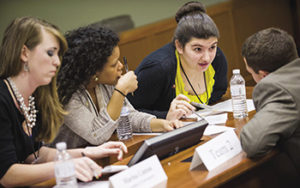 Leggett is a senior biology major who, because of her dream to become a doctor, is thrilled to see “health care” as the overall theme. D’Ancona is a senior pre-law major from Elverson, Pa. James Demmel and Clayton Harrington are both senior religion majors (Harrington is also studying history). And Marisa Linton is a senior mass communications major who hopes to work in agriculture as a public relations professional.

“We look for [students] who are interested in public speaking or can speak well, students who can think well on their feet and students who are passionate about moral issues and interested in ethical dilemmas and working through them,” he says.

The students are “recruited” or volunteer for the Ethics Bowl prior to the fall semester, and they meet as part of an independent study program once a week to go over the ten cases that may appear in the NCICU event (which also includes two never-before-seen cases). Campbell’s team, even before the competition in Raleigh, says they’ve improved just by being on the team — each picking up skills that will help them in their future endeavors. For D’Ancona, it’s given her the confidence to speak and present arguments in a public setting, an important skill for an aspiring lawyer.

“When I started looking at law school, I thought I didn’t want to be a courtroom attorney, because I wasn’t good at arguing a point in front of a judge, or a jury or an audience,” D’Ancona says. “Ethics Bowl has showed me this is something maybe I can do.”

Linton — who has spent the past semester studying Aristotle’s virtue ethics, which she referenced several times throughout the competition — says ethics training will benefit her career as a communications professional in the farming industry. “Ethics is huge in agriculture,” she says. “There’s a lot of controversy, and it’s our job to make the ethical decision. I think this training can be used anywhere.”

These life lessons are reasons why English wants to make the Ethics Bowl more than a once-a-year event. Starting next fall, English and Vandegriff will teach a class on ethics, accepting up to 15 students who’ll meet on Tuesdays and Thursdays each week. Future Ethics Bowl teams will be chosen from these classes.

“We will get them started debating cases right away,” English says, “and as we go along, we will fill in the moral theory that they’ll need.”

Leggett’s “brownie” comment is her way of easing the nerves leading into Round I. Yes, St. Augustine’s team is wearing matching outfits and whispering to each other, but Campbell’s team is no slouch. After introductions and a “good luck” from the moderator, the case is presented: Is it ethical for physicians is less-developed countries to prescribe thalidomide [a drug infamous for its side effects to babies when taken by pregnant mothers] for patients with leprosy? 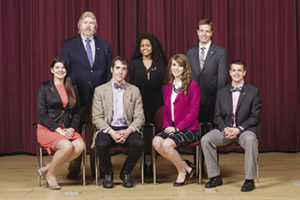 Teams in the Ethics Bowl often deliver the same side of an argument; in that situation, the team that delivers the most compelling argument is deemed the winner. But in this case against St. Augustine’s, the schools disagree. Campbell’s opposition argues the drug should be kept out of the hands of people in developing countries, whereas Campbell delivers the proposition that the benefits of the drug outweigh the risks. After an hour of debate, the judges choose St. Augustine’s the winner by a slim margin — a surprise to a Campbell team that was confident in its performance. One mistake, the judges say, was Campbell’s assumption that thalidomide was the cheapest option on the market. There were also a few minor contradictions in their argument, another judge says.

The team has approximately five minutes — the time it takes to climb a flight of stairs to the room where Round II is being held — to dwell on the loss. Then their concentration must turn to the next round, against Mars Hill. The question is whether a community hospital’s administrator should consider allowing his nonprofit community hospital to be bought out by a large corporation that could move some of its services 100 miles away (yet strengthen other services locally). This case is a surprise, the first one of the weekend, and neither team has had a chance to prepare beforehand. Although potentially more difficult, Campbell’s sound argument that a hospital’s primary duty is to its patients is awarded with a win, and Day One ends with smiles and relief.

The competition is set aside that night for a social dinner at the State Capitol, just blocks away from the law school. The students are careful not to stay out too late congregating with their fellow teammates, however, with the knowledge that day two will begin bright and early the next morning.

It’s 8:45 a.m., and all 20 teams have congregated in the same lobby as the day before. Campbell’s team is back at its lounge chairs, heads bent over their notes as they discuss the outcome of yesterday and the two rounds ahead of them today.

“It’s always nerve wracking, you don’t know what the judges are going to say or what they’re looking for,” Harrington says. The other four students are quick to affirm. Minutes later, they’re back in the classroom and shaking hands with Gardner-Webb University, their next opponents. Like the second case of Day One, the case presented this morning is a surprise.

“I kind of like the surprise cases, because everyone is on the same playing field,” Demmel says as the team waits for the moderator to set the clock. He leans back in his chair, and if the nerves from the previous day are still around, they aren’t readily apparent. The students are familiar with the way each round will proceed, and by the time the moderator announces the round has begun, they are eager to start constructing their arguments.

The topic is the morality of physicians accepting gifts or money from drug manufacturers interested in promoting their products. Demmel’s and his teammates’ confidence is reflected in their performance, a second win in as many tries.

They’ve already come a long way from that first round, Vandergriff says. “Regardless of what the score is, I think it’s been a successful experience, because they’ve learned so much.”

Round 4 is Salem College, another team “dressed alike,” with matching gold scarves and high heels. The topic is ethical principles for a man regarding his decision about his dying mother’s health care.

Salem ultimately wins, but both teams are all smiles in the end. Four tense rounds in two days are complete, and Campbell walks away with a record of 2-2. Wake Forest is the ultimate winner, defeating Gardner Webb (which lost to Campbell in Round 3) in the fifth and final round.

English says he is proud of his team’s effort and lauds the event for bringing out not only the “competitive spirit” in each school, but also for giving the students a chance to get to know their peers from other parts of the state and develop future professional contacts.

“It is such a great experience for the students to meet students from other colleges, and to meet these fascinating judges who give them feedback,” he says. “I’m proud of our team. I think their scores really reflect the work they put into it. They did what they wanted to do.”