Becoming drummer for one of music’s hottest acts didn’t happen overnight for Mike McKee, it was a process built on practice, networking and determination

Growing up, Mike McKee (’06) liked to hit things. Anything. Pots and pans, garbage can lids, box fans, various kitchen appliances — you name it. If striking it with a stick made a neat sound, 11-year-old Mike included it in his “drum set” and wailed away.

And instead of discouraging their son and his racket, Mike’s parents — both piano teachers — liked the imagination he showed and were happy to see him find his musical identity.

“He showed a keen ability with sound and discovering different kinds of sounds and different rhythms,” said Mike’s father, Richard McKee, today an associate professor of music at Campbell University. “So as he got older, he began putting his own drum kit together … piece by piece, as economically as possible.”

Fast forward to June 2012 — Mike McKee is the drummer for Durham-based Delta Rae, a band making its national television debut on the Tonight Show with Jay Leno. They’re performing their hit, “Bottom of the River,” a song that would score the band millions of new fans a year later by its inclusion in the trailer for HBO’s ratings beast, “True Blood.”

There with his four bandmates on the Tonight Show stage is McKee, donning his signature black fedora. Instead of drums, McKee is standing behind an overturned trash can, rattling it with a thick metal linked chain.

McKee is once again that 11-year-old boy making music with items you’d likely find in a tool shed. The only difference is his audience, which on this night had grown by just a few million.

Like his early drum set, Mike McKee’s rise to Delta Rae didn’t happen all at once.

It was the product of years of practice, his fair share of failures and lots of networking.

As teenagers, McKee and his younger brother Mark (who played bass) formed a band with Mike’s friends and practiced in their parents’ home, since the drummer is typically the guy who has to host rehearsals (it’s tougher to move drums around). Mike enrolled at Campbell in 2002 and juggled playing music (with bands ranging from country to Christian rock), working and going to school (switching majors from business to Spanish early on).

He also managed to meet his wife Melinda. The two met as freshmen in a Spanish class and started out as simply friends, Melinda recalled. That friendship became stronger when the two played together in a band called One Less Frame as sophomores.

“I remember some friends teasing me about him being interested [beyond friends],” Melinda said, “but I swore they were wrong. That was a constant theme throughout college — our friends declaring we were going to end up together, and me hearing none of it.”

So, have you ever wondered what would happen if you took the sweet male-female harmonies of Fleetwood Mac, the grittiness of Mumford & Sons and then blended them with the stompy fervor of Adele’s “Rolling In The Deep” and some bluegrass twang? OK, we actually have wondered that, and we can now confirm that the answer is Delta Rae.
— mtv.com

Three years after graduation, the two were both living in Raleigh. By this time, Mike was asking Melinda about dating. Even then, she was hesitant.

“After a few months of awkwardness, I found myself thinking a lot about what a smart, talented, handsome and incredibly compassionate guy he was, and a switch just kind of flipped.”

The two married in 2010, eight years after meeting in that Spanish class. And at that time, Mike McKee was still trying to build a career in music, whether that meant playing gigs or “running sound” at events or parties. It was the latter that led to his first contact with Eric Hölljes, one of the founding members of Delta Rae.

McKee was working a fraternity party at Duke University, and Hölljes was playing keyboard for hip hop artist Mike Posner at the party. Posner had a Top 10 single in 2010 with “Cooler Than Me,” but McKee came away from the gig focused on Hölljes.

“I just thought he was fantastic,” McKee recalled. “I found him after they played, and said if he ever wanted to do anything else, I was interested in making music with him. And so I gave him my card.”

A year and a half later, Hölljes, his brother Ian and sister Brittany (along with vocalist Elizabeth Hopkins) formed Delta Rae in Durham. Needing a drummer six months in, Hölljes found the “drummer-for-hire” card McKee gave him and invited him to audition. McKee said it took only the first few notes on the demo tape he was given to convince him Delta Rae was the band he needed to be in. The gig he was destined for. 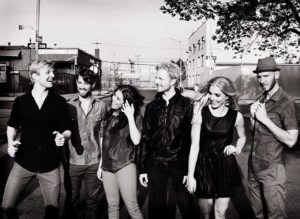 “There’s a certain spark music can ignite in you,” McKee said. “You can hear something really good and like it, but there are other moments where it hits you in a place you didn’t expect. It grabs you and takes you somewhere else. This band did that for me, and I knew immediately I had to be a part of it. Before the audition, I learned the material more thoroughly than anything I’d learned before.”

The story goes that legendary music mogul Seymour Stein — the vice president of Warner Bros. Records, chairman of Sire Records and the man who signed Madonna, Depeche Mode and other huge names — was at Duke University Hospital in Durham with his daughter, who was being treated for a brain tumor. He developed a rapport with his daughter’s doctor, and a month later, the doctor brought up a local band during a conversation.

That band was Delta Rae, and Stein took a listen simply as a favor. The story goes — he was “blown away.”

The Hölljes siblings, Hopkins, McKee and bassist Grant Emerson had released a five-track EP in 2009, and with their new record label, they released their debut full-length album, “Carry the Fire,” in June 2012.

It’s the kind of success many bands strive for, but very few achieve. Still, McKee is humble about the band’s current fame and said it still has a long way to go before he’s content.

“It’s nice, but it definitely doesn’t feel ‘big’ yet,” McKee said. “We still travel in a van. We eat at Subway. We’re still humbled by our rooming situation sometimes.”

But the ride has allowed McKee to play the same venues and the same festivals as some of his music idols. In Gulf Shores, Ala., he met Steve Ferrone, Tom Petty’s drummer and, as he put it, McKee “acted like a total fanboy.”

In an interview with a Milwaukee paper over the summer, rocker Melissa Etheridge called Delta Rae “the new Fleetwood Mac” when asked about the bands she currently listens to.

“The critics aren’t always as nice, but to hear something like that from someone like Melissa Etheridge — veterans of this industry — and knowing they like your art … that’s fantastic,” McKee said.

“Bottom of the River,” at its conception, was intended to be a cappella.

No chains. No trash cans. McKee wasn’t having that. “I just said, ‘I gotta lay into this song,’” McKee said. “I couldn’t sit on the sidelines and be there when this song blew up.”

Trash cans and chains have been done before, so McKee wasn’t reinventing the wheel by including them. But he knew it was the right sound for this song.

You can’t argue with the results.

“We’re very proud of Mike, and I guess you can say we’re amazed as well,” Richard McKee said. “We’re not amazed that things have worked out, because we knew he’d be successful. But it’s his absolute persistent diligence — doing what needs to be done to succeed. Whether it’s networking, making people feel at ease around him or his willingness to do what it takes to improve himself and his band. Step by step, he’s built this career, and none of it was easy. So we’re amazed with Mike. Maybe there’s a better word, but I’ll stick with that one.”

His wife has another word — inspirational.

“I don’t think I could be more proud of him,” she said. “People don’t tend to think about how hard his kind of life can be. Living out his dream also means accepting a lifestyle that is pretty grueling physically, mentally and emotionally. But every single day he dives after it with passion, grace and the most intense work ethic I think I’ve ever witnessed.”