Aaron Schnoor has heard every stereotype there is about homeschool students. But in Aaron’s case, 12 years of homeschool education was a springboard for undergraduate success. The junior from Apex is a J.A. Campbell Scholarship recipient on pace to graduate with two degrees in four years. He was vice president of the Student Government Association and a staff writer for the Campbell Times. And he credits his successes to the love of learning instilled in him through a homeschool education.

“It was not until college that I ever considered the uniqueness of my education,” says Schnoor. “I was homeschooled from preschool until my senior year of high school, so it is only natural that I perceived homeschooling as ‘normal.’ I was surprised, then, when I began hearing questions from my peers during my freshman year at Campbell.” 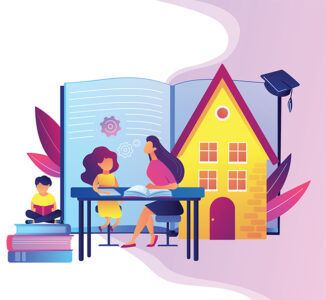 Did you actually learn anything? Do you have friends? Did you stay in your pajamas all day?

“The question, ‘How did you make friends?’ is one of the most popular and frequently asked questions I receive,” says the rising sophomore. “Most people struggle to comprehend how in the world kids make friends if they do not attend traditional school, and reasonably so.”

So are the myths surrounding homeschoolers’ socialization, academic rigor and lack of preparedness well-founded?

According to the National Home Education Research Institute, homeschooled children perform 15- to 30-percent better than public or private school students on standardized tests, regardless of whether or not their homeschooling parent is a certified teacher. Homeschooled children also generally score above the average student on the ACT and SAT.

There are around 2.2 million home-educated children in the United States, but the homeschooled population is growing at a rate of 8 percent each year. Over these last few months, homeschooling has been thrown into the national spotlight as millions of children are sequestered at home rather than learning in traditional classrooms as schools and college campuses around the world shut down from the COVID-19 pandemic.

“The homeschooling world is changing, and people are more receptive now,” says Schnoor. “The myth is that homeschoolers never leave the house and are socially inadequate. That’s how it’s portrayed and that is unfortunately the case for some students.”

That wasn’t the case for Schnoor and Fanning. Fanning’s mother proctored weekly tests and sent her to a testing center for a yearly exam to ensure no one could challenge her ethics. In high school, she transitioned to Wake Technical Community College and used the college as the primary source for her courses and exams.

“In the world of social media and the internet, homeschoolers are far from living the sequestered and family-focused lifestyle they once endured,” Fanning says. “We had access to co-ops, weekly classes with other students in the area, travel team sports, theater troupes and nearly any niche imaginable. I had friends from co-op, softball, volleyball, work, church and Wake Tech that I saw several times a week, many of whom I still see to this day.”

Schnoor’s parents also sent him to homeschooled co-ops, and he eventually began to travel the country doing speech and debate competitions through the National Christian Forensics Communication Association. He played on a traveling homeschool baseball team, the Wake Warriors, which competed against private and even some public schools in Wake County, and also swam against local students with the Raleigh Seahawks.

Senior admissions counselor Eli Maness has seen homeschooling become more prevalent in recent years. His recruiting “territory” includes all North Carolina private schools and the entire homeschool market— populations with similarities in terms of what their students are looking for in a higher education experience. Many of the students and parents that Maness works with prioritize schools that make space for religious beliefs and give a multitude of options for curriculum.

According to Maness, Campbell may appeal to homeschool students more than larger state schools. The smaller average class size of 20 students and easy access to professors makes for an easier transition. Many homeschoolers also hold faith beliefs that align with Campbell’s Christian mission, he says, and the University is one of only five private schools in the state with Level 6 accreditation.

Plus, homeschool students are more likely to come into college with a career plan already formed, and Campbell’s graduate schools allow them to pursue both undergraduate and graduate education in one location.

“For many homeschool students, as with traditional students, getting used to campus life is a big adjustment,” says Maness. “Particularly if they are not used to sharing resources with others.”

Maness can rattle off numerous resources in North Carolina for homeschool families to give their students a rigorous and socially fulfilling education. Local co-ops like Colonial Homeschoolers in Wake County and national organizations like Classical Conversations provide community. Parents can share resources, rely on each others’ degrees and fields of expertise and carpool to extracurricular events — or at least they could, before social distancing measures closed co-ops and gatherings.

With reports of nearly one billion students around the world missing school due to the COVID-19 pandemic, American schools have been shuttered indefinitely and districts are scrambling to offer online learning options. Many parents find themselves in the role of a reluctant homeschooler.

However, this experience differs greatly from typical homeschooling before the shelter-in era. Many of the resources that families like Aaron’s relied upon to homeschool are currently unavailable. Libraries and museums are closed, community classes are canceled, friends are distanced and there are no co-ops meeting to share resources. While far from ideal, this sudden, large-​scale experiment in homeschooling and virtual learning may prompt more families to explore education alternatives.

Many who experienced learning at home in high school were quick to adapt the forced remote learning caused by the closure of college campuses across the world.

Michael Williams, a recent graduate of the charter class of the School of Engineering and a homeschool graduate in high school, says that while nobody anticipated the pandemic and the shutdown, he wasn’t completely thrown for a loop when it happened.

“I had taken a couple online classes before college, including during my senior year of high school,” he says. “And I was used to working on my own time and having regular check-ins with the teacher and fellow students as a homeschooler. Probably the thing that was the most difficult was trying to coordinate and organize my team meetings for differing projects. But Campbell did a good job preparing us for our many teams, and I was very appreciative of the teaming software that we had at our disposal to finish our projects well.”

Schnoor says his experience working from home definitely made it easier to finish the last few months of the semester learning remotely.

“So much of homeschooling is learning independently and finding motivation to do well in classes even when a teacher isn’t always guiding you,” he says. “When Campbell classes went online for the remainder of the semester, I had to find some of that independence and motivation to succeed.”

Even before the COVID-19 shutdowns, statewide figures released in July 2019 showed that 20 percent of North Carolina’s students are not attending the state’s traditional public schools. That percentage is expected to continue rising, as homeschools, private schools and charter schools all continued to add students during the 2018-19 school year while traditional public schools lost children for the fourth year in a row.

For Schnoor, the biggest adjustment from homeschool to college wasn’t transitioning to larger class sizes or the myriad of extracurricular opportunities, but adjusting to the difference between his and his classmates’ attitudes on education in general.

“When I came in as a freshman I assumed everyone would want to be here, to learn, and to go to class every day. To me, Campbell was a great opportunity as well as a natural next step, but I found out that many people have the mindset that college was something to check off a list— their parents were sending them here, so they had to go to classes and had to learn. I had never experienced that. I had never been around people who didn’t want to learn.”

Schnoor went on to find like-minded students and a friend group that became family. He began writing for the Campbell Times newspaper, and campaigned and won as freshman class president.

“I would definitely homeschool my kids in the future. I would make sure they got out of the house, met people and had social activities like I did, but I want the hands-on experience of sharing an eagerness to learn with them.”