Asked to talk about the dozens of framed newspaper articles on his wall from the Washington Post or New York Times detailing the fall of a U.S. president and his important role in making it happen, Gene Boyce instead walks to the other side of his under-furnished new office in the Norman A. Wiggins School of Law and points to a worn-out front page from the Old Gold & Black.

The 1953 edition of the student newspaper from then-Wake Forest College brings a smile to Boyce’s face as he points to a photo of a much younger version of himself and a headline declaring him the school’s new “campus president.”

“I ran against the captain of the football team that year,” he says with an air of pride. “I never thought I’d win in a million years, but there I was. It was a hell of a surprise.”

It was the only election Boyce would ever win. It was also the only one he’d ever run in.

G. Eugene Boyce always preferred talking in front of jurors rather than voters. After college and law school, he would go on to become one of North Carolina’s most prominent trial lawyers, winning lawsuits that have returned billions of dollars to state taxpayers.

His cases are legendary in this state. In Bailey v. North Carolina in the early 90s, Boyce won $788 million for 185,000 retired taxpayers whose benefits were illegally taxed. His team won a settlement worth $440 million in two other cases involving state taxation of personal property.

In all, according to his numbers, Boyce has won a total of about $1.4 billion for his clients, and in the process has saved North Carolina taxpayers about $3 billion. The headlines from those cases — from papers like the Raleigh News & Observer, Charlotte Observer and even small daily out of Asheboro — adorn his wall, too.

But none of those cases carry the gravitas — the kind of whoa, you were there for that? response — as Watergate.

In 1973, Boyce served as assistant chief counsel to the Senate Watergate Committee, headed by Sen. Sam J. Ervin. The committee’s job was to investigate a possible connection between President Richard Nixon’s reelection campaign and the arrest of five men on June 17, 1972, charged with breaking into the Democratic National Committee headquarters at the Watergate hotel in Washington, D.C.

Boyce — who a year prior had reluctantly agreed to be a campaign manager for Congressional candidate Ike Andrews only because Andrews needed someone with an office in Wake County — just “happened to be in D.C.” helping Andrews fill out his staff when he was approached by Rufus Edmisten, the committee’s chief deputy counsel, because of his successful trial experience back in North Carolina. One of Boyce’s tasks was to interview former White House aide Alexander Butterfield. The rest is history.

Boyce was in the room when Butterfield revealed that Nixon had a secret audiotaping system in the White House.

“We thought it would be a throwaway question,” Boyce recalls. “Is there anything to what we’ve heard about a tape recorder in the Oval Office? It turns out, there were five. That’s when the ship hit the sand.”

The committee subpoenaed the recordings, believing they would either prove or disprove testimony that Nixon had knowledge of the break-in and cover-up efforts. But Nixon refused, citing executive privilege. On July 24, 1974, the Supreme Court ruled the president must surrender the tapes — which did reveal he had participated in a plan to cover up the burglary. Before the House could impeach him, Nixon resigned on Aug. 9, 1974.

Boyce’s involvement in Watergate went well beyond Butterfield’s bombshell. In addition to his legal expertise, he helped the committee log massive amounts of data using punch cards on a primitive computer — “it was a huge machine with blinking lights that took up an entire room” — borrowed from the Library of Congress.

There’s a story about that computer on his wall, too.

“I look at my Watergate involvement as the result of an amazing set of circumstances,,” Boyce says. “My friendship with Ike brought me to D.C., and I happened to like trial work, and Ike didn’t. If none of that happens, maybe Nixon stays in office.”

A GIFT FOR CAMPBELL 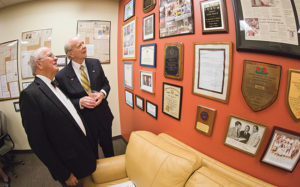 In September, Campbell Law School announced the establishment of the G. Eugene Boyce Center for Advocacy, the result of an $8 million donation, the largest gift in the school’s history and one of the largest gifts in Campbell’s 128-year history.

“Our advocacy program has a rich tradition of success, and Gene’s gift ensures that this will only continue,” Law Dean J. Rich Leonard said at the ceremony announcing the gift and the center’s name. “His investment in Campbell Law will benefit countless students, and will have a significant positive impact on citizens in the Raleigh community and beyond.”

Comprised of three courtrooms and a suite of adjoining offices previously occupied by the North Carolina Business Court, The Boyce Center houses Campbell Law’s two primary advocacy professors, adjunct faculty and staff. The courtrooms within the center will be updated with state-of-the-art technology in evidence presentation. Its expanded space will allow Campbell Law to host interschool competitions, as well as college and high school competitions as consistent with the institution’s curricular needs.

In addition to his sparsely decorated office, Boyce has “practitioner in residence” status with the school he had very little association with until 2007 when he first learned Campbell planned to move its law school from Buies Creek to Raleigh (the move happened two years later).

“I thought it was a good idea,” he says. “Raleigh then was the only capital in the 50 states that didn’t have a law school. My alma mater is Wake Forest, but I thought this was an excellent move by Campbell.”

Shortly after J. Rich Leonard, a former U.S. bankruptcy judge and longtime acquaintance of Boyce, became dean in 2014, he approached Boyce with an idea for a new advocacy center with his name on it. Boyce was hesitant at first.

“I told him he was crazy,” he says. “I said, ‘Are you sure you want to do that?’ I have a lot of powerful enemies in this state. I’ve been fighting the attorney general in court for the past 14 years.’”

But Boyce says he likes Campbell’s approach to teaching advocacy. And he really liked the opportunities his gift would allow the school to pursue. The new center will provide space for training programs to practicing lawyers on how to use courtroom technologies during trials. When available, the center can also serve as a location for actual hearings and trials in state and federal court proceedings. It currently houses the only courtroom in North Carolina that can house a three-judge trial.

When asked what his own definition of “advocacy” is, the man who has won more than a billion dollars on the behalf of state taxpayers is finally at a loss for words.

“That’s a good question,” he says after a minute of thought. “That’s why it needs to be taught. It’s difficult to define.”

When a lawyer can put him or herself into the shoes of the person they’re representing and pursue that person’s best interest, that’s the first step to becoming an advocate, he says.

“It’s knowing what is right and what is wrong,” he says. “I know that’s simplistic, but that’s what all lawyers should do.”