Each Thursday morning about 15 students, faculty, and staff gather in a study room at the Norman Adrian Wiggins School of Law in downtown Raleigh for Coffee with God. Gabe Snyder, a second-year law student, leads that Bible study and provides the coffee.

This fall they studied the Bible’s Esther. The book tells how the queen of Persia faces trial after trial; and when up against her greatest challenge, uses her faith, intellect, and courage to save her people, Jews living in exile. The book never mentions God. And that is why Gabe chose it.

So often in life, he says, people go through trials and tragedies and don’t see God working in them, merely wondering “Where is He?” It’s a question he himself was tempted to ask last winter.

After earning a bachelor’s in history from Campbell in May 2014, Gabe enrolled at Campbell Law. Between his first and second semester of law school, he decided to spend part of his winter break traveling with his oldest sister, Lydia. She was a regional director for a company that sold the kind of ads you see at the movies. She was on the road often, and she loved it.

Though 13 years apart, Gabe and Lydia were close. She wasn’t too excited when Gabe was born; but when she held him the first time, she became his biggest fan. She stayed up to feed him. She changed his diapers. She rocked him to sleep. As he got older, she taught him how to say, “Yes, sir” and “No, ma’am” and “Please” and “Thank you.” If he dropped a “Sir” or a “Ma’am,” she would playfully pop him on the head. During his freshman year at Campbell, it was Lydia who told him their mother had cancer. It was also Lydia who led him to God. 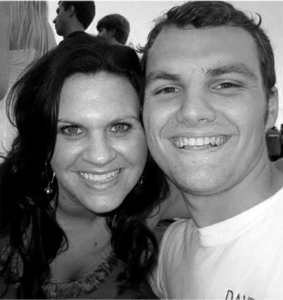 She did that for others, too. As an adult, she started and led a Bible study, Date Night with God. It drew young, single women from around Greensboro. They talked about their struggles with boys and men. She encouraged them, “Focus on the Spiritual Father who loves you unconditionally.” Each morning she emailed her group a verse with a note about how it applies to life. She was also writing a devotional.

Lydia was full of life and connected with people in a way Gabe has never seen. She spoke to others in their own language. Because of that, she introduced people to God and brought them to church when they otherwise would not have. “She embraced and showed the true purpose of the Christian life,” he says. “She was a servant of God and a missionary.”

Though in law school, Gabe still had much to learn from her. So he was with her on a sales trip during his winter break on Dec. 16, 2014. She was in the passenger seat, and he was driving on a back road in Louisiana when a car crossed the center line, traveling 70 miles per hour in a 55 MPH zone. The car — driven by a drunk driver — hit them head on. Firefighters cut Gabe out of their car. He was airlifted to a Mississippi hospital. Among his numerous injuries, he had a broken tibia, femur, and radius, and a shattered elbow. He underwent five surgeries and months of physical therapy. He used a wheelchair and then a cane for five months. Lydia died on impact. She was 32.

“The whole story is terrible,” Gabe says, “but if there’s anything good that can come out of it — I don’t want to keep the story of Lydia to myself.”

So he returned to Campbell Law to start his second semester in January 2015, missing only the first week of classes. By February, he had started Coffee with God, modeled after Lydia’s Date Night with God. That first semester, at each meeting, he read aloud some Bible passages, and the group talked about life and faith.

This fall came Esther, the book in the Bible with no mention of God. But that doesn’t mean God wasn’t there and wasn’t part of Esther’s story. God was there, Gabe says, but “it’s alarming how many times God shows up, and we just don’t see it.”

It would be easy to do the same with Lydia’s story. But if Gabe learned anything from the accident, he learned this: “Whatever is going on — good or bad — God is in control, and He’s going to use any situation in some way for good. If anything, it opened up the door for me to talk to others about God and faith.”

Coffee with God will study the book of Daniel next and focus on humility and prayer, while the Date Night with God group Lydia started continues to meet in Greensboro. Gabe also plans to finish the devotional Lydia was writing and use his law degree to help others when they are at their most vulnerable.

“I want to keep her memory, her life going,” he says.