Ian Scott was 18 and found himself, of all places, at a small rural airport near Clinton, North Carolina, on Sept. 11, 2001. Upon hearing about the attacks on the United States — three passenger jets hijacked and crashed into New York City’s World Trade Center and the Pentagon in Washington, D.C., and a fourth jet (bound for the nation’s capital) crashed into a field in Pennsylvania — Scott hurried to his hotel room and like just about every American that day, parked himself in front of a television and, horrified, watched it all unfold.

“I remember sitting there thinking, ‘Well … here we go,’” recalled the Sanford native, who turns 30 this March. Within days, Scott was training with the U.S. Military — which he joined earlier that year — and preparing for war. By 2003, he was on the first wave of the U.S. invasion of Iraq. A decade later, Scott is on the first wave again. This time, he’s among the few dozen students at Campbell University enrolled in the College of Arts and Sciences’ new homeland security major.

The junior wants a career working for the federal government, and he thinks courses on domestic counterterrorism, protecting critical infrastructure, border security and response to catastrophic events will give him the upper hand, as still a relatively small number of four-year universities in the U.S. offer homeland security as a full degree. In fact, Campbell is the only four-year school in North Carolina to do so.

Scott is older than many of his classmates, many of whom were in elementary school when the towers fell in 2001. He says his experience in the military — seeing the enemy firsthand — provides him a unique perspective on the field.

“I’ve seen it. I’ve reached out and touched it. I’ve been to Iraq, Turkey and other countries where this is all very real,” Scott said. “I want to use my experience in the real world. Campbell is helping me do that.”

There’s good reason the topic of Sept. 11 comes up so often in discussions about homeland security and even the decision to introduce it as an area of study at Campbell University.

The words “homeland security” were barely in our vocabulary before that day. Just over a year after 9/11, President George W. Bush signed the Homeland Security Act, which created the U.S. Department of Homeland Security and the new cabinet-level position of Secretary of Homeland Security. It was the country’s largest federal government reorganization since 1947, just after World War II.

David Gray was living in Washington, D.C., and working for the government on Sept. 11, 2001. One of his neighbors — a man with a wife and children — was killed when a jet flew into the Pentagon that day. Being near that particular “ground zero” on such a historical day had an impact on Gray, who’d spent his career in the U.S. Air Force and working for several government agencies, including the CIA.

“It was a pretty intense time,” said Gray, who recalled driving by the Pentagon while it was still smoking shortly after the attack. “I remember everybody working in government and on the Hill … they were wound up pretty tight. I’ll never forget it.”

Modest when asked about it, Gray doesn’t go into much detail about his career. But his resumé is impressive.

A specialist in international and national security affairs, Gray’s areas of expertise include security and strategic studies (both national and international), security policies, strategic and operational intelligence, political violence and insurgencies and international terrorism … to name just a few. His work has taken him to the Middle East and around the world, including various parts of Europe, Asia and Africa. He’s worked with governments, businesses, law enforcement agencies and intelligence organizations in several countries.

“I think it’s a good program … a robust program, and we’re still developing it,” said Gray. “It’s a terrific opportunity for students who are interested in a career in the federal government, whether it’s the DEA, the ATF or the FBI. We’re preparing students for those jobs, and not just on the federal level, but the state and local levels as well.”

In order for students to earn their bachelor of science degree in homeland security, they must complete seven courses — National and International Security, Homeland Security, Emergency Preparedness and Response, Critical Infrastructure Protection, Terrorism, Intelligence and National Security, and Interagency Operations — plus an internship and senior seminar in homeland security, two courses in their concentration (terrorism or intelligence), basic courses and a foreign language through the 201 level.

Gray said it’s important to note the curriculum is based on the national strategy for homeland security and the Homeland Security and Defense Education Consortium Association.

“The courses we offer aren’t the result of someone just falling out of bed and saying they want to teach a class on terrorism,” Gray joked. “They’re benchmarked on national and homeland security standards.”

And they’re taught by a man who’s seen it all. Been there, done that.

Last year, Gray traveled to Jordan to visit the King Abdullah II Special Operations Training Center to discuss “strategic security issues” with the center’s officers and members of the Jordanian Armed Forces. Talks of a future Study Abroad program in Jordan even surfaced.

“It’s important for the students that their faculty have experience in the real world,” Gray said. “A professor with that experience is in better position to help, advise and counsel them. There’s no doubt the students appreciate real-world experience. No doubt in my mind.”

Homeland security began as a concentration for criminal justice majors in 2010. Its popularity grew faster than some expected; and according to Gray, making it a major beginning this fall was the next obvious step.

The announcement was good news to Stephen Budd, a Jacksonville junior, who transferred to Campbell during his freshman year as a criminal justice major. Budd said he’s enjoyed the criminal justice curriculum, but he wanted something that would give him a better shot for a career in federal government.

“If I hand my transcript to a potential employer, and they see the courses I took in homeland security that dealt with terrorism and critical infrastructure protection, I think that favors me in terms of landing that federal job,” said Budd, whose father is a former Marine who works with federal agencies. “A homeland security degree will give me a better opportunity to be where I see myself ending up in the long run.” 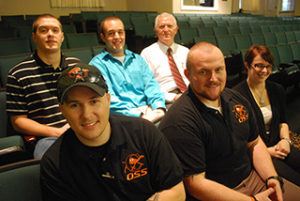 A criminal justice major who landed an internship with the Harnett County Sheriff’s Office last summer, Kinney said he wants to begin his career in local law enforcement and eventually work his way to the federal level.

“Understanding insurgencies and what motivates terrorists, preparing for a disaster or an attack … it’s all very eye-opening and interesting,” Kinney said. “When I started out as a criminal justice major, I quickly realized my chances were better if I were to become an expert in a certain field. Homeland security has always interested me … especially since 9/11.”

According to Gray, career options in the homeland security field — whether it’s at the local or state level, national or international level or even the corporate level — continue to grow.

“And I don’t think it’s topped out,” he said. “I think we’ll continue to see growth for years to come.”

And 10 years from now, Blaine Rhyne, a junior from Pittsboro, sees himself working with agencies that help track down terrorists … or something else that “really matters.”

“I started as an exercise science major, and no offense to anybody in that program … I just didn’t feel like I was making a difference by taping up an athlete’s ankle,” Rhyne said. “My grandfather was in the military for 30 years, and my dad was in law enforcement all his life. This is where I was meant to be.

“I want to be a part of something like this.”

Several students who made up the then homeland security concentration joined Gray on a trip to Washington, D.C. to tour the Capitol, the FBI headquarters and the ATF (Alcohol, Tobacco and Firearms) headquarters, where students had access to areas very few people are allowed to see.

The experience was nothing short of “awesome,” according to Smith, a senior from Pennsylvania.

“To be there and see these professionals doing their jobs firsthand, it was a great trip,” she said. “Not many people get that kind of opportunity.”