By Billy Liggett | Photo by Will Bratton

It was a job he initially didn’t want and, to this day, a job he jokes that he never officially accepted. But 25 years after becoming Campbell University’s sports information director, Stan Cole can’t imagine doing anything else.

Cole was honored for hitting the quarter-century mark on June 11 at the College Sports Information Directors of America convention in Orlando. It’s an honor Cole — who turned 50 this year — has yet to fully appreciate, or fathom, for that matter.

After graduation, Cole did the daily newspaper rounds, working at the Sun Journal in New Bern as a sports writer covering high school sports, East Carolina University basketball and minor league baseball in Kinston, “covering as much as they’d pay me to write,” he said.

He and his wife, Claudia, moved to Raleigh after her job in New Bern shut down, and Cole was picked up by the Wolfpacker, a North Carolina State Athletics publication, for about $800 a month (which was a considerable raise). Not long into this job, Cole learned that his former boss and mentor at Campbell University — SID David Snipes — was stepping down. Cole was informally asked if he wanted the job.

He said no. He laughs to this day recalling the story.

“[Former Campbell President] Dr. Norman Wiggins called me in for an interview, and just told me I was going to start on June 1,” Cole said. “I didn’t really have a chance to say no. I still have never accepted this position.”

Cole started at Campbell in the summer of ’89 with an electric typewriter, a calculator for stats, a bunch of paper and liquid paper and the new fax machine the athletic department just received. The university lacked a football program, and lacrosse was still years away. The job was a good fit at the time, because it allowed Claudia to finish her degree, and the couple’s plan was to give it two to four years and then move on.

But over the next few years, several things happened to Cole that he didn’t expect. His wife got a good job nearby. Their daughter came soon after. Slowly, Cole came to love and appreciate the town and the community he thought were behind him after college. And he fell in love with his job and Campbell University.

“It’s just such a great place to work and raise a family,” he said. “I enjoy my job. There are 350 Division I schools out there, and I’m in charge of publicity for one of those. A lot of people out there would love to do what I do. And with every year that passes, every athlete whose story we get to tell, every parent who clips our stories on their kids and holds on to that memory, I grow to love this job more.”

The job itself has changed quite a bit in 25 years. Game coverage of stat-taking was all done with paper, pencils and typewriters in those early years until 1992, when Cole’s department finally got its first computer. Back then, Cole’s No. 1 priority was getting the newspapers and TV stations in larger markets like Raleigh, Durham, Fayetteville and even Charlotte to notice Campbell University Athletics. Today, the No. 1 outlet is Campbell’s heavily trafficked website, gocamels.com, and its numerous social media branches. Sure, the big media coverage is nice — Campbell’s basketball and baseball programs have been televised on ESPN3 and ESPNU numerous times this year — but it’s no longer the be-all, end-all when it comes to his job.

“Sure, I still go out and have lunch or play golf with writers and other media members to get them to notice Campbell, but we understand that in this media age, we have to provide the information ourselves and get it out there to the masses,” Cole said. “The vast majority of our content is created from within. We have to hire and cultivate very good communicators to get our stories out there.”

One of those recent hires is Chris Hemeyer, the athletic department’s director of broadcasting and digital media. In addition to being the “Voice of the Camels” on the radio and local television, Hemeyer has produced hundreds of videos and short clips promoting Campbell athletics. The department’s YouTube page has generated clips of dunks that have gone viral and promoted the Campbell brand in ways Cole couldn’t have dreamed of in the early ’90s.

“Stan is an incredible resource, he is a walking encyclopedia of Campbell Athletics knowledge,” Hemeyer said. “Campbell has been an enormous part of his life, and he has returned the favor by promoting and informing the community, state and nation about the Camels. He has also seen an unbelievable transformation in his time here, from fledgling Division I program to where we are now.” 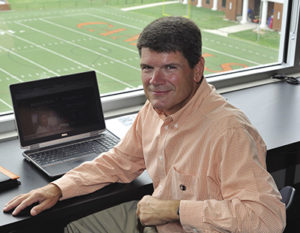 Along the way, Cole has hired hundreds of student interns and part-time employees and has served as mentor just as much as boss to many of them. Joey Beeler (’02) got his start in collegiate sports information 17 years ago by walking into Cole’s former office behind the university’s old gymnasium (a new arena and convocation center went up in 2009) and asked for a work study position.

“Stan threw me into the fire,” said Beeler, “doing a lot of the not-so-fun stuff like clipping newspaper articles and gluing them in a book. After a few years as a student assistant, he hired me as a full-time intern.”

Beeler would return to work for Cole a few years after graduation, and a year later, he moved on to Davidson University as an assistant to the SID.

Today, Beeler is the sports information director at Davidson, running the publicity for a program that rivals Campbell in several sports, most notably football, where the two programs are part of the Pioneer Football League. But while the athletes from the two schools may not like each other much, Beeler and Cole are very much friends, and Beeler says he leans on his former boss often when he needs advice.

“Stan’s a true professional, and I try to mold my office after his to this day,” Beeler said. “It was always a fun atmosphere at Campbell. In this profession, you work a lot of hours with your co-workers, and if you can’t have fun doing it, you’re not in the right business. I’m forever indebted to Stan. I have no idea where I’d be if he didn’t take a chance on me.”

Cole said he’s humbled by the honor from COSIDA and is happy to have a job that always seems to surprise him and rarely gets dull.

“I think the fun in being involved in athletics — whether it’s the professional, collegiate or prep level — is that there’s always the promise of things getting better,” he said. “Even if the program has a down year, there’s always the excitement of ‘who’s coming in next year’ or ‘who’s getting recruited?’ The job stays fresh.

“And there’s so many people who passionately care about Campbell Athletics,” he added. “Our department is bridging the gap between those who’ve cared for us for a long time and those who are just now discovering us. It’s neat to be a part of that. It’s neat to be a big part of such a great community. It’s all very satisfying.”