“You and I are about to have an uncomfortable conversation.”

These words mark a rough start to another Veterans Treatment Court, a twice-monthly “alternative sentencing court” designed for veterans and active duty members of the military in Fayetteville, neighbor to Fort Bragg. Cumberland County’s court is one of 264 nationally, and it’s been presided over by the same man since its inception in January 2015.

He’s District Court Judge Lou Olivera (’00 Law), a veteran himself who experienced the hell of combat in the Gulf War and a man who understands the aftermath those experiences can have on a person upon their return to civilian life. Veterans Treatment Courts distinguish themselves from other speciality courts by providing counseling and medical services and even employment, education and housing for ex-military in the legal system for misdemeanors and certain lesser felonies.

Mental health issues, alcoholism, drug abuse, unemployment and poverty are but a few of the problems many veterans face. Many suffer from post traumatic stress disorder, which often goes hand-in-hand with the other issues.
The court — and Judge Olivera — are there to help them. But not coddle them.

On this day, of the 13 men scheduled to go before the judge to provide updates on their treatment, nearly half have fallen short meeting all of their responsibilities in the program — making appointments, meeting probation officers and other requirements. This day requires what Olivera calls “tough love.” There are consequences, and they’re tougher to hear in a room full of their fellow veterans. But there’s a silver lining when court is dismissed — all 13 men are still in the program. And at the end of the day, Olivera still has their backs.

“What I push for more than anything else here is honesty. If you’re honest with me, you’ll earn my respect. You’ll get your treatment. We’ll get you through this.” – Judge Lou Olivera (’96)

“Today was a hard day,” he says after the two-hour session. “But there are days when there are far more accomplishments. Far more reasons to celebrate. We’ll have baby announcements, sobriety and drug-free milestones. Lots of applause. But people have slips and relapses, and these guys are no different. What I push for more than anything else here is honesty. If you’re honest with me, you’ll earn my respect. You’ll get your treatment. We’ll get you through this.”

Olivera’s compassion made national headlines back in April. Hours after he sentenced former Green Beret and Afghanistan veteran Sgt. Joe Serna to a night in jail for violating his probation, Olivera spent the night with Serna in his one-man cell. The two sat on a cot for hours and shared stories about their families and their military experiences.

Serna suffers from PTSD stemming from an attack on the armored truck containing him and three other soldiers on a dirt road in Kandahar. An explosive device sent the truck toppling into a canal — killing the three soldiers with Serna. One of those men, Sgt. James Treber, unstrapped Serna as the truck filled with water and moved him to the one pocket of air as he searched for another. Serna, who is now several months into the treatment court program, earned three Purple Hearts and several other accolades for his service.

Serna’s story and his night with Olivera soon became the subject of a column by Bill Kirby in the Fayetteville Observer, “Judge’s unbelievable compassion for a veteran.” The story went viral — People Magazine, Huffington Post, Washington Post, Fox News, CBS Evening News and many others reported on it, and soon, Olivera’s face was popping up on social media feeds across the globe.

“We’ve gotten a lot of attention over something I tried to keep quiet,” says Olivera, thumbing through envelopes containing letters of support from all over the world — Afghanistan, Great Britain, Korea. “When the calls started coming in from the media, I told them I had no comment. If Joe wanted to tell his story, which is a tragic story, then I’ll tell you my part of Joe’s story. It’s all about him, and if it helps Joe to talk about it, then great for him. Joe still has a long way to go in this program, but he’s going to make it.”

According to the Bureau of Justice, one out of every 10 inmates in state prisons across country have prior service in the U.S. military. More than half of those veterans served during wartime. And more than half of those prisoners are serving for violent crimes (rape and sexual assault the most common offenses). Alcoholism, drug use and unemployment are also common. Approximately 23 percent of the nation’s homeless are veterans.

Cumberland County is home to Fort Bragg and more than 42,000 veterans or retired military personnel. The county also has one of the nation’s highest crime rates, ranking 14th in the nation in property crime in 2013.

The statistics stress the need for the Veterans Treatment Court in Fayetteville, one of three such programs in North Carolina (Harnett County launched the state’s first in 2014). The program deals with misdemeanors and lesser felonies, and applicants must show that either substance abuse or mental health issues have contributed to their legal problems. Once they’re accepted, the program lasts between 12 and 18 months. In that time, the veterans are engaged in counseling, attend medical appointments, meet with probation officers, regularly drug test, spend time with a mentor and attend Judge Olivera’s court twice a month.

Cumberland’s court celebrated its first and (so far) only graduate in late April — Air Force veteran Garrett Vann, a veteran of two tours in Afghanistan who battled substance abuse, was homeless and faced several felony charges before entering the program. Olivera called Vann’s transformation “amazing,” and the graduation marked one of the judge’s many high points since leading the program.

Olivera shares more than combat experience with the veterans. He’s seen the toll drug and alcohol addiction can have on people and their families. A native of upstate New York, Olivera grew up in a family of addicts — his father and grandmother were alcoholics. After his mother died and his father’s parental rights were terminated, he was raised by his stepfather, a heroin addict. One of his uncles died of AIDS contracted through shared needles. As did a stepbrother.

“I’ve seen it,” Olivera says. “I’ve seen what addiction can do to people. I also have great memories of my grandparents and my uncle. Substance abuse and mental issues don’t make bad people. They make good people do dumb things. In my court, I see good people who need help.”

Craig Shore, Cumberland County’s Veterans Treatment Court coordinator and Olivera’s right-hand man during proceedings, says the judge’s empathy is what makes him right for the job. Olivera, he says, has the unique ability to integrate the law with compassion.

“Having grown up in a dysfunctional family system, he understands the ravages of addiction and displacement,” Shore says. “As a veteran of the U.S. Army, he knows and embodies the bond between military members. His life experiences make him the ideal arbiter.” 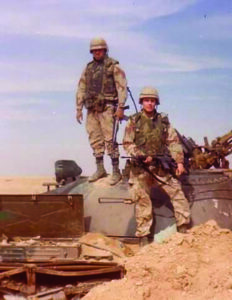 Lou Olivera (left) saw combat while assigned to the XVIII Airborne Corps G2, Counterintelligence Section during the Persian Gulf War. He was awarded the Army Commendation Medal for his study and analysis of Iraqi unconventional warfare units and capabilities.

Olivera’s second veteran in today’s court is doing well. He and the judge converse more like old friends than their current roles suggest. Olivera asks about his wife’s new job, and the veteran pokes a little fun at Olivera’s new haircut. Their five-minute back and forth ends with “hooahs” and applause from the group.

This happens more than the “rough talks.” At times like these, court feels more like a counseling session. The 13 men not only want to succeed, they want to see their brothers succeed. The good days and the success stories are just as therapeutic for Olivera, who joined the Army to escape the tragedy that surrounded him growing up.

“I felt like I had no other options in life,” he says. “Then I join the military, and I’m astonished. Here I am, some little Yankee Hispanic nobody, and they’re telling me I’m smart … that I scored well on these tests, and they want to put me in the counterintelligence and counterterrorism fields. This was pre-Sept. 11, so there weren’t too many of us in these fields.”

He was deployed to Iraq for the Gulf War in the early 90s, and he became a go-to guy for officers when it came to issues on terrorism. Olivera found a purpose in the military, and he loved his work.

“I saw amazing things and met amazing people,” he says, “but I’ve seen the horrors of war, too. The military takes your youth — yes, you see the world, you get an education and you get training. But when you’re discharged, you’re left with all the other stuff, too. All that unspent youth.”

During his service, Olivera shatter his collarbone, injured his knees and suffered damage to his ears. Not a night goes by, he says, where he doesn’t grunt in pain while trying to sleep.
“And not a day goes by where I don’t think about the friends I lost,” he adds.

Olivera knew if he wanted a career in the counterterrorism field, he would need an education. He earned his bachelor’s degree at UNC-Pembroke and interviewed for the Defense Intelligence Agency shortly after graduation. A clerical error with his transcripts kept him from getting the job. Disheartened, Olivera saw a sign in a library encouraging people to try law school. He tore off one of the contact strips from the bottom of the sign and applied to Campbell. While waiting for that decision, he received a call from the DIA informing him his initial application was finally approved. Campbell accepted him shortly thereafter.

“It was a big decision,” he says. “But you can guess what decision I made.”

Everything happens for a reason. And Olivera’s decision to attend Campbell has put him in the position to help his fellow veterans.

“I owe Campbell a lot,” he says. “Both Pembroke and Campbell gave me a chance. Me — some guy from New York whose mom died when I was 13 and whose father’s parental rights were terminated. I thought college was just for smart people, and I never considered myself as smart. I mean it … I owe Campbell a lot.”