This is the scene of the most scandalous thing we ever did as kids, Rhett McLaughlin says to the camera, the J.A. Campbell building framed behind him on a brutally hot morning in July.

As always, Rhett is standing next to Link Neal, his best friend since Sept. 4, 1984 — the day the two met on the first day of first grade at Buies Creek Elementary. It’s nearly 35 years later, and the duo — known to the world as just Rhett & Link — are two of the most viewed and most celebrated YouTube “intertainers” out there. Their Good Mythical Morning channel has more than 16 million subscribers, and their videos have earned more than 6 billion views. Their two books have both appeared on the New York Times Bestsellers List.

It’s the most recent book — The Lost Causes of Bleak Creek, a fictional adventure/thriller inspired by their childhoods in Buies Creek — that has brought them to their old stomping grounds (and the site of their “scandalous act”) on this day. Visits to the homes they grew up in, the Cape Fear River, Buies Creek Cemetery, what they think is their giant tree and, of course, Campbell University make up a three-part Youtube mini-documentary promoting Bleak Creek, which has been described as “Stranger Things meets the South.”

In the book, Rex and Leif  — best friends entering their freshman year of high school in a rural North Carolina town (sound familiar?) — set off their own scandal while filming their low-budget horror masterpiece, “PolterDog.” In real life, back in 1992, it was bored teenage Rhett and Link discovering they could access the roof of the J.A. Campbell building and toss rocks from that roof onto cars passing by on Main Street.

“We did not make contact with any of those cars,” Link recalls in the documentary.

Back to July, and Rhett, Link and their Mythical camera crew are in the stairwell, looking up at the hatch they climbed through decades ago and giddy at the chance to do it again. Only, this time, there’s a padlock barring them from recreating the scene.

Link turns to the camera. “I’m going to take full credit for that lock being up there.” 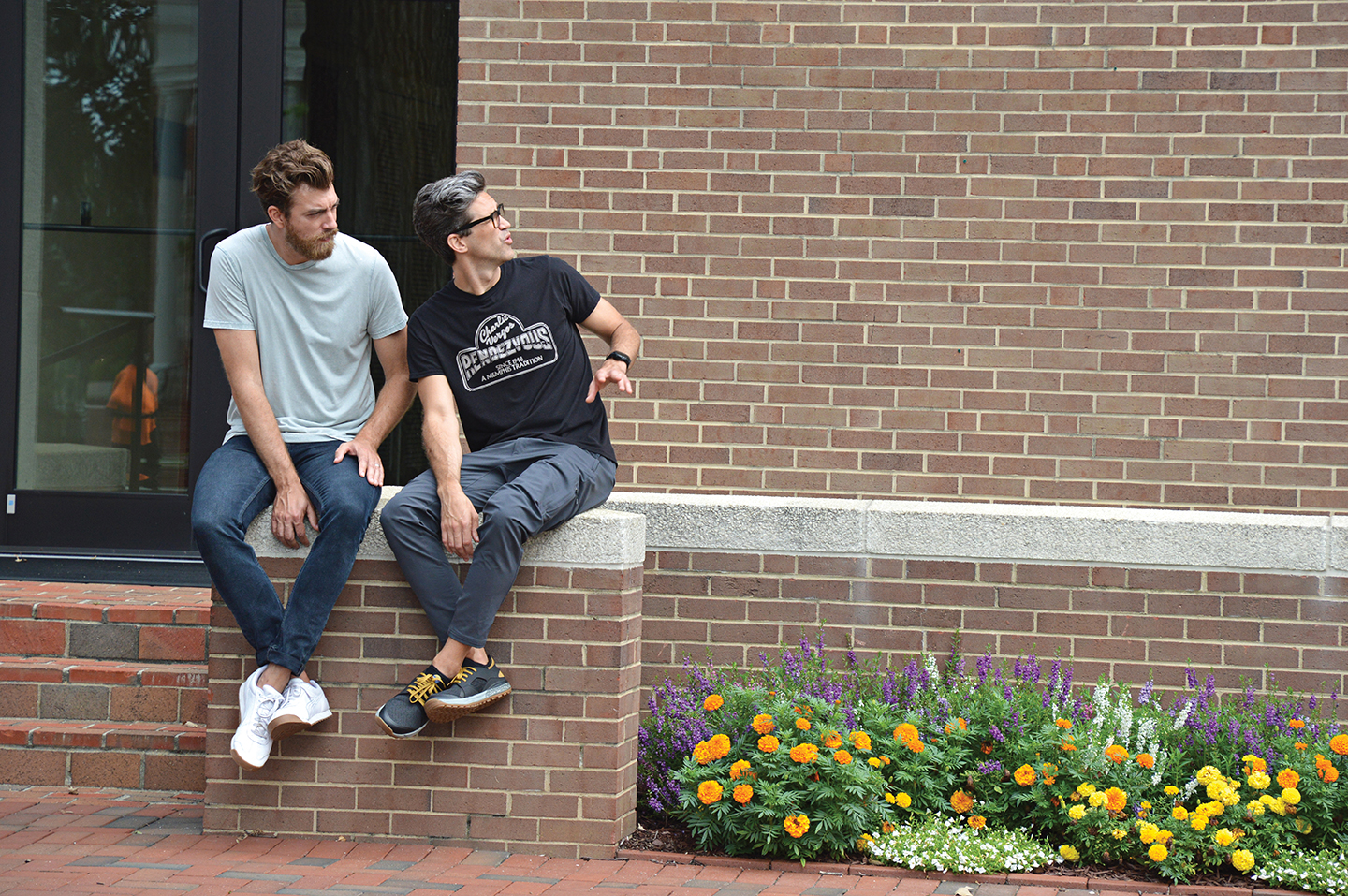 It’s 1992 in Bleak Creek, North Carolina — a sleepy little place with all the trappings of an ordinary Southern town: two Baptist churches, friendly smiles coupled with silent judgments, and an unquenchable appetite for pork products.

This opening sentence from the book jacket description of The Lost Causes of Bleak Creek could also stand in for a description of Buies Creek, North Carolina (in fact, “Buies Creek” was the name of the fictional town, too, in the first transcript of the book). Of course, it’s not by accident — the town has served as an inspiration for much of their body of work over the last 10-plus years. In 2009, they filmed an award-winning documentary, Looking for Mrs. Locklear, chronicling the search for their first-grade teacher (a film that unintentionally revealed the struggle of the Lumbee Indians). Their first book, The Book of Mythicality, shared the story of their childhood and the early friendship.

In Bleak Creek, the town acts as a supporting character. Its unspoken rules and strict moral code serve as the antagonists to Rex and Leif’s curiosity and desire to break free from their small town shackles. For those familiar with Buies Creek and nearby Lillington, descriptions of the two Baptist churches, the pizza shop, the auto parts store, the coin laundry business and even Cate’s Christmas Cave (a “living testament to Bleak Creekians’ year-round appetite for celebrating Jesus’ birthday) all have a tongue-in-cheek familiar feel.

According to Link, the churches and stores, as well as the fabric of the “small-town South” they remembered growing up in Buies Creek, contributed significantly to the Bleak Creek described in the book. But he adds that Bleak Creek isn’t exactly Buies Creek. For example, Buies Creek was never home to a Whitewood School — the book’s mysterious boarding school where bad kids are sent and brainwashed to adhere to that moral code … or else. And no, Whitewood wasn’t based on Campbell University either (we asked).

“The reform school in our story was loosely inspired by what was called the ‘Alternative School,’ a day school for kids who had crossed one too many lines,” Link says. “Of course, that school was nothing like the Whitewood School of Bleak Creek, which was more like a prison for kids. We wanted something to represent the lofty (and often unrealistic) standards that adults sometimes apply to kids, and an over-the-top reform school that strips kids of their last vestiges of individuality seemed like the perfect solution. Thankfully, there was nothing like that in Buies Creek.”

Some locations in the book, however, were lifted straight from their childhoods. The pizza place where Rex and Leif frequent in Bleak Creek is based on the real L’il Dino’s from Buies Creek lore. The Cape Fear River (name unchanged) plays an important role, as does a giant tree that served as their preferred meeting place as kids.

Rhett & Link revisited some of those places in their three-part YouTube documentary — the third video taking them to the Cape Fear to find their “conversation rocks” and the giant tree where the two of them and their childhood friend Ben (who died recently and has a character named after him in the book) would meet and attempt to touch hands while wrapping their arms around its giant trunk. While both have been home several times since moving to Burbank, California, to run their Mythical entertainment company and lifestyle brand, the videos marked the first time in over a decade the two returned together with “nostalgia” in mind.

Rhett says he was struck by how much Buies Creek had changed, yet remained the same, after all those years. The biggest change, he says, was Campbell University (they are amazed by the construction of the student union and the campus’ two traffic circles in one video).

“However, as soon as you drive off campus onto a country road, it feels just like it did when we were kids riding our bikes past those endless fields,” Rhett says, adding that the trip made him think a lot about how much different his childhood was than his own kids.

“We tend to think that it’s actually less about where we live now and more about the time we live in,” he says. “In all our driving around Buies Creek for a week during the middle of summer, we saw almost no kids out playing, riding bikes, fishing, exploring or doing any of the stuff that used to keep us busy. Not to sound like a couple of old curmudgeons saying, ‘Now back in my day …” but we were surprised to see no kids creating their own fun outside.” 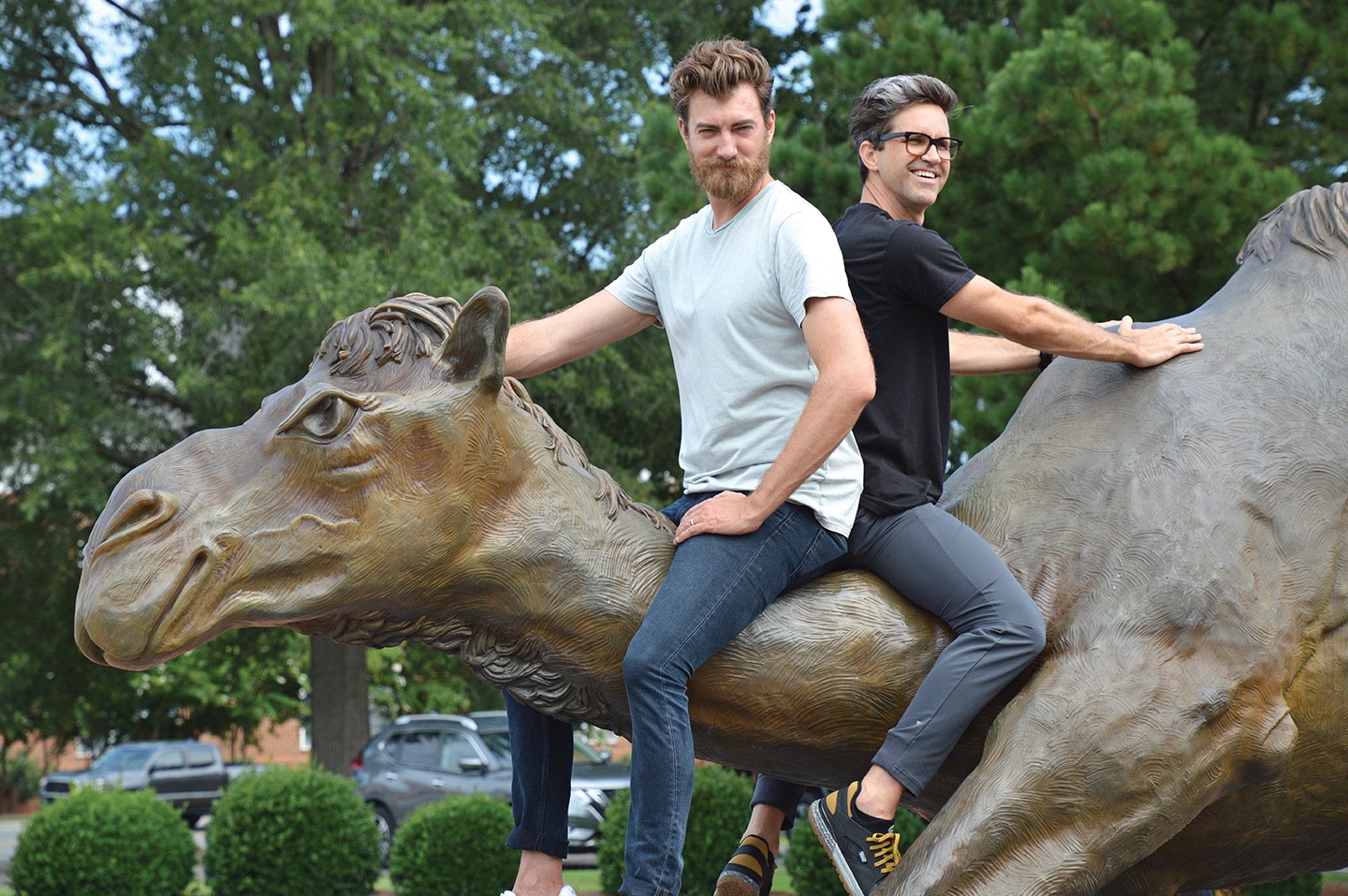 Rhett & Link describe their book as a more mature Hardy Boys novel. There’s humor in it. There’s a bit of nostalgia and campiness to it. But there’s also a dramatic, thrilling and even dark side to The Lost Causes of Bleak Creek.

“This isn’t a children’s book,” Rhett said back in November during an episode of their popular Ear Biscuits podcast. “It’s a lot like anything else we do. Can my [16-year-old] son read it? Yeah … there’s some stuff with a little color to it, but he can take it. Anybody in high school can read it. If you grew up in the 90s, there’s stuff in it for you. We go way beyond Jean-Claude Van Damme Kickboxer and other 90s references.”

The duo’s reach helped boost the book to No. 13 on the New York Times’ Bestseller List for combined print and e-book fiction in mid-November, just behind Stephen King’s Doctor Sleep. The book — combined with the more than 6 million views their three-part YouTube series filmed locally produced — has given more exposure to their hometown (and to a smaller extent, Campbell University) than any marketing firm could dream up.

On top of that, it’s positive exposure. Rhett & Link’s affinity for their childhood and the town where it all happened comes through in their work. Even when strict moral codes and lack of good restaurants are tossed in as part of the story, their appreciation of Buies Creek shines through.

“We wanted to make something where the South was a character. We always assumed it would be a film, but our agent asked us to consider starting with a novel,” Rhett added. “Rex and Leif are very much based on Rhett and Link, but they’re also different in many ways. I think the most fun aspect about all of this, for me, was pulling on the things that are actually true about us and were true about us and taking them to completely crazy places, because it’s a novel. It was a crazy exercise.”

Standing in the woods amongst tall pine trees and fat oak trees in an undisclosed location near the Cape Fear River, Rhett & Link recalled a blood oath they signed near that same location when they were 15 (another childhood memory used in the book). Neither of them can find the red-stained document today, but they remember the gist of their promise.

“We found a sharp rock,” Rhett said, “cut our palms and put it down on a sheet of paper that we were going to do something great. And do it together.”

“I think for many years, I was looking for an opportunity to come back here and do what we did,” Link said, squinting up at the trees surrounding them. “Go swimming in the river. Go back to the rocks. I think I can continue now. I can move forward in our friendship. It’s like a renewal of our vows.”