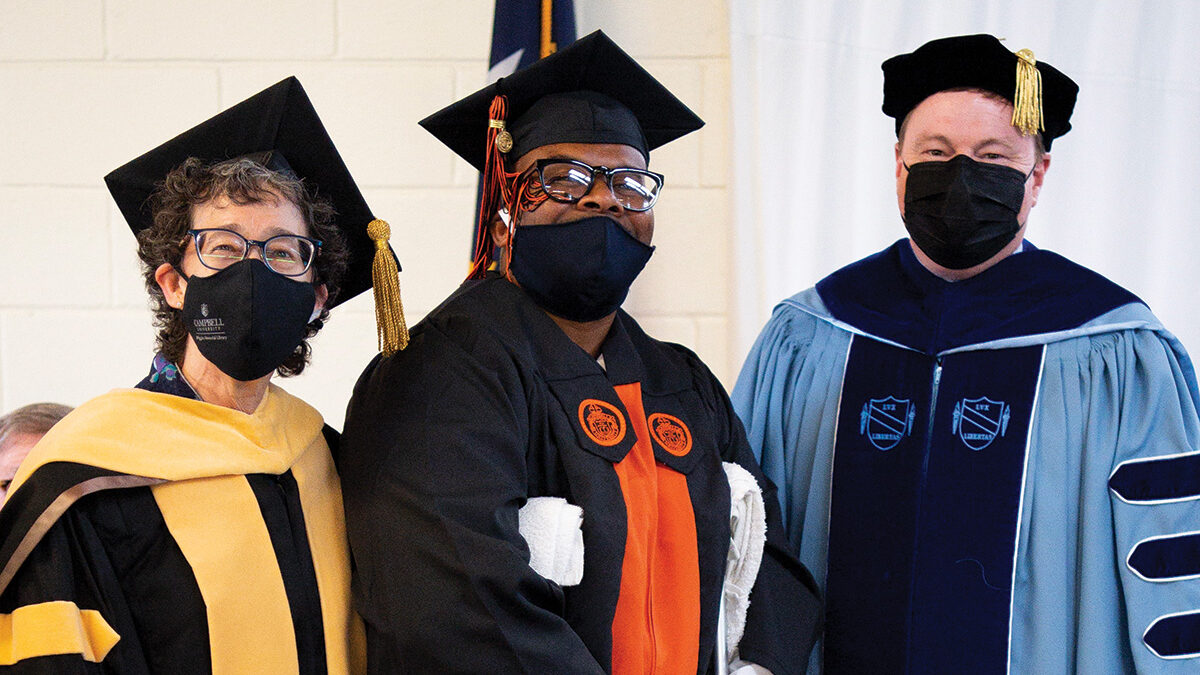 Jamel Byrd stands with Dr. Beth Rubin, dean of Adult & Online Education, and Dr. Michael Wells, dean of the College of Arts & Sciences, after walking to the podium for his degree.

Of all the literature and ideas new and old introduced to Juan Tellez-Ruiz during his first two years at Sampson County Correctional Institution, Plato’s “Allegory of the Cave” stuck with him the most.

Discussed in Dr. Sherry Truffin’s English 101 course, “Plato’s Cave” was written more than 1,500 years ago, yet the allegory still resonates, especially for those who’ve lived much of their life behind bars. In it, a group of people imprisoned in a cave (chained to a wall) watch shadows projected on the wall in front of them from objects passing by a fire. The prisoners give names to these shadows (they do not see the actual objects). The shadows become the group’s reality, but not an accurate representation of the real world. When one prisoner is freed and sees the actual objects that made the shadows, he does not believe the reality that he is seeing. He turns away and runs back to the cave to the reality that he is accustomed to.

According to Plato, a philosopher (or critical thinker) aims to understand the shadows and the objects that created them. There are those, however, who do not desire to leave their prison, for they know no better life.

“You know, when we first read it, I didn’t understand any of it. I’d never in my life read anything like it,” says Tellez-Ruiz, incarcerated since 2018 with a projected release in 2023. “But the overall message of it was enlightenment through education and how the uneducated are essentially in a cave. It takes an educator to liberate those people in the cave.

“That became my journey to enlightenment from my own cave. From this prison.”

The success of Campbell’s prison teaching initiative will ultimately be measured by the recidivism rates of the students who take part in it. But these are numbers that won’t be measured for several years — some of these students still have 10 or more years left in their sentence. Some are scheduled to be released shortly after the first bachelor’s degree program is set to end.

Until these numbers are out and those who hold the purse strings can decide whether the investment is worth it, “success” has to be defined in other ways. For Truffin, success was measured in the development of her students from Day 1 to their final class. It was measured by watching their confidence grow and their attitudes change. Their willingness to express their thoughts and share new ideas.

“There was a real selflessness to their work, because they felt like they needed to be successful so that this opportunity would be available to the people coming up after them,” Truffin says. “I think that a liberal arts education is designed to not only develop your skills, but also develop your values, empathy, self sacrifice and those other intangibles that are important in higher education, specifically Christian higher education.”

Dr. John Roberson says the August commencement ceremony was another important sign of success because of the obstacles the students and the program had to overcome to make that day happen.

“I’m proud of the students, and I’m proud of what this means for the future,” Roberson says. “Seeing not only the graduates, but those rows of students behind them waiting their turn. I just felt a great sense of pride for this institution, for these students and for the potential legacy of the program.”

Warden Robert Van Gorder says he’s seen “the worst of the worst” in his 30 years at Sampson County, but he’s never seen a program come in and have an immediate positive impact like this one.

“Even if these 11 men didn’t graduate, it was a success,” he says. “Just in the change in their mindsets and attitude. They’re learning they can change, and that’s a win, right? I’ve never seen that kind of change until this program came along.”

Dr. Beth Rubin has a similar declaration. In her 35-plus years working in higher education as an instructor and administrator, Rubin calls this program one of the two most important programs she’s ever been involved in.

“These men do not have other options, and we’re providing a path for them if they’re willing to work for it,” she says. “That’s why not only is this program important, but expanding it to other prisons is important. Because without it, recidivism is real, and it’s so hard to make a new life.”

Rubin describes it with a two-word Jewish phrase, “Tikkun Olam,” which translates to “heal the world” or “repair the world.”

“This program is an act of Tikkun Olam,” she adds. “It makes the world a better place.”

In his “Allegory of the Cave,” Plato offers a scenario where the prisoner doesn’t return to the cave immediately, and although the light of the sun would be blinding and painful at first, his eyes would eventually adjust.

Education is the light, Juan Tellez-Ruiz says. His eyes are adjusting to this reality. When he is released, things will be clear.

“Maybe we didn’t understand or appreciate reality before this,” he says. “Maybe that’s the problem with how we did things or how we treated other people or our families. I feel like now, personally, I can handle people in other groups or better handle arguments.

“I can perpetuate peace instead of violence. And I believe I can do these things because of my education.”