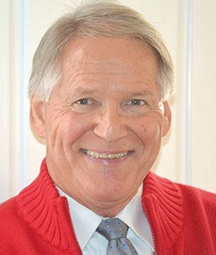 Professor Tony Cartledge met Fred Rogers for the first time in his empty television studio in Pittsburgh, Pennsylvania. The set was stripped down and taping was finished, but as they sat in his office and talked after months of letter-writing, Cartledge knew Rogers was the same kind neighbor in real life as he was on air.

“I wish everyone could know what it feels like to be hugged by Mr. Rogers,” says Cartledge. “He was a beautiful example of pastoral care from one human being to another.”

College students today did not grow up with Mr. Rogers, but Cartledge is teaching them about his legacy with a talk he calls “Lessons from the Neighborhood,” originally written for a Thanksgiving service in Butler Chapel and delivered at several churches in the area. The response has been uniformly positive, particularly for those who watched the show with their children.

To bring Rogers to life for those who do remember him, Cartledge sings “A Beautiful Day in the Neighborhood, while exchanging his suitcoat for a red sweater, sits down on a bench and changes his shoes — never quite as quickly as the man himself, he says — and teaches a lesson on love and what it means to be thankful.

“That iconic introduction was simple, stable and slow, which is exactly what children needed to settle down and truly understand,” Cartledge says. “I always explain to the audience that I’m not pretending to be Mr. Rogers, but he was a good friend of mine.”

That friendship began in 1994 when Cartledge and his seven year-old daughter Bethany were involved in a tragic motor vehicle accident. Bethany died and Cartledge was seriously injured, spending several weeks in recovery. To process his grief, he borrowed a laptop computer (a rare commodity at the time) and wrote letters to people who had been especially influential in Bethany’s life. One of those people was Mr. Rogers.

Cartledge’s letter thanked Rogers for the programming that taught his daughter about self-esteem and contributed to her positive attitude toward life. He never expected more than a form letter in response. But about a week later, Cartledge got a phone call from Rogers, who spoke to him for about a half an hour and asked him to “call him Fred.”

“He showed a lot of care, promised to pray for me and asked me to pray for him and said he wanted to stay in touch. I took him seriously.”

As he wrote and processed his grief, Cartledge would send poems and essays to Rogers, who always wrote back with a personal note and a compliment — “so I’m not sure he always told the truth,” Cartledge says — and when Cartledge headed north to attend a meeting, the two met for the first time in person.

They met again when Rogers gave a commencement address at NC State in 1996. Cartledge still remembers seeing Rogers leave his table at the luncheon to speak to a small child who was peering through a window to get a glimpse of his television hero. He and Cartledge kept up their correspondence until the year Rogers died. Cartledge still treasures his letters and notes, which were always written in a teal flair pen.

Today, Mr. Rogers is making a comeback in documentaries and an upcoming film starring Tom Hanks. Cartledge isn’t surprised that the soft-spoken man’s popularity is rising again after the last episode aired in 2001.

“We have become so divisive and so polarized. It is so hard for anyone to have civilized debate anymore,” he says. “We choose up sides and don’t even want to talk to someone on the other side. Sometimes I try to imagine how Fred would address that. I’m sure he could find gracious words even for people that I can only shake my head at.”

Cartledge will continue to deliver his message, “Lessons from the Neighborhood” in honor of Rogers’ legacy.  “I think he’s a symbol of a more civil time and of the kind of person we need more of. We need more people like Mr. Rogers.”