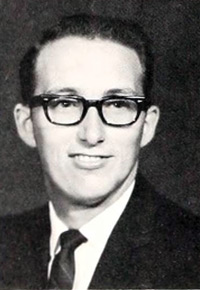 Oscar Harris (’65) believes strongly he wouldn’t be where he is today without Campbell University.

The four-term mayor of Dunn, former two-term North Carolina state senator and owner of accounting firm Oscar N. Harris & Associates says college would have never been possible had it not been for what was then Campbell College in the early 1960s.

“It was the only college I could afford at the time,” said Harris, a native of nearby Spivey’s Corner. “I was a day student — in fact, I was president of the Day Students Club — and I had to drive back and forth from home each day. Had it not been for Campbell, I doubt I would have even gone to college.”

In the nearly 50 years since his college days, Harris has remained close with his alma mater. The former president of Campbell’s alumni association currently serves on the university’s Board of Trustees. He has also served as chairman of the founders’ committee for the newly launched School of Osteopathic Medicine, and one of his proudest moments as a Campbell alumnus came in September at the ribbon-cutting ceremony for the school’s new home, the Leon Levine Hall of Medical Sciences.

Campbell has raised more than $32 million for the school, North Carolina’s first new medical school in 35 years, and the committee served as an advisory board for the fundraising efforts. In three years time, the committee’s fundraising goal jumped from $10 million to $20 million and eventually $30 million, a goal achieved before the start of classes for the medical school’s charter class in August. Campbell President Jerry Wallace said Harris’ leadership was a big reason the school was able to meet its goals.

“Oscar tirelessly advocated for a new medical school at Campbell University and hundreds of alumni and friends stepped forward to make this project a reality,” Wallace said. “We could not be more proud of the results and the leadership of one of Campbell’s favorite sons.”

Campbell has come a long way since Harris’ time as a student, and he’s thrilled to be a big part of the history being made today.

“This medical school is not only a big deal for Campbell, but for Harnett County and the state of North Carolina as well,” says Harris, who served as a speaker for both the groundbreaking and ribbon-cutting ceremonies for the new 96,500-square-foot facility. “We’re educating doctors who’ll focus on becoming primary care physicians and serving in communities where they’re needed most. And at the same time, this school will be an economic engine for our area and the state. It’s a win-win situation. How can you go wrong in helping people?”

Reaching the $30 million goal was not only the result of hard work by many involved in launching the school, according to Harris, but also the willingness of donors to give — and give more than they were accustomed to.

“Some of those who gave had never given that amount of money to the university before,” Harris says. “But they did it because of their love for the university and their desire to help our region and our state’s health care industry in any way they could. They could see the benefits this school will have. We’re enhancing the opportunities for students, all while providing better health care. This school is attracting smart students from all over the country, and people are taking notice.”

In his multiple roles at Campbell, Harris is helping the university open doors for students who may otherwise not have had the chance to practice medicine … much like the rural little college opened doors for him as a teenager.

“If you would have told me we’d have a medical school … if you told me back then Campbell would become a university, I would have been amazed and incredibly happy,” Harris says. “From [presidents] J.A. and Leslie Campbell to Dr. [Norman] Wiggins and Dr. [Jerry] Wallace, Campbell has been blessed with incredible leadership. They’ve done a superb job in developing this university to what it is today. I think Campbell has made its alumni proud, and in turn, the alumni have made Campbell proud.”

Harris also commended the work of his co-vice chairs, Henry Smith and Annabelle Fetterman, in addition to the rest of the committee. He said the entire committee was grateful for the work and leadership of Britt Davis, vice president for university advancement.