By the fall of 2019, the heart of Campbell University’s campus will have an entirely new look and feel. The centerpiece of President J. Bradley Creed’s Campbell Leads fundraising campaign will be a 100,000-square-foot student union that will enhance both the educational and social lives of students.

According to Creed, the student union — to be built where Baldwin and Kitchin halls currently stand in the Academic Circle — will provide academic support and promote student involvement, foster engagement with university employees and guests, offer amenities that enhance campus life and support campus partners like the Office of Student Life and the Campbell Times.

“We envision the student union to be a dynamic space for building the Campbell community,” says Creed, who has promoted the idea for a center since Day 1 as president.

Construction on the new facility will begin with the fall demolition of Baldwin and Kitchin, dormitories that have served main campus since the 1950s. According to Jim Roberts, vice president for business and treasurer, bids for the building will be taken in January, with construction expected to be completed mid- to late-2019.

Amenities in the new facility will include four dining locations, including a main cafeteria to replace Marshbanks Hall, plus a juice bar and deli shop. An apparel and collegiate memorabilia store will also be part of the first floor, set near a two-story fitness center. The second floor will include a banquet hall that will seat up to 800 people and a movie theater that will double as an instruction area for larger classes. The building will feature a glass tower that can change lighting colors, and the walls facing the Academic Circle will be made almost entirely of glass, providing a unique view of main campus’ historic buildings.

President Creed will embark on a 13-city speaking tour this fall — similar to his “An Evening with J. Bradley Creed” introductory tour during his first year in 2015 — to offer a sneak peek of the new facility and provide more details of the campaign, which will also go toward funding the more than 900 scholarships Campbell provides each year.

Creed’s second speaking tour will begin on Sept. 12 in Dunn, followed by a Sept. 26 appearance in Fayetteville. The full schedule can be found at campbell.edu/president. 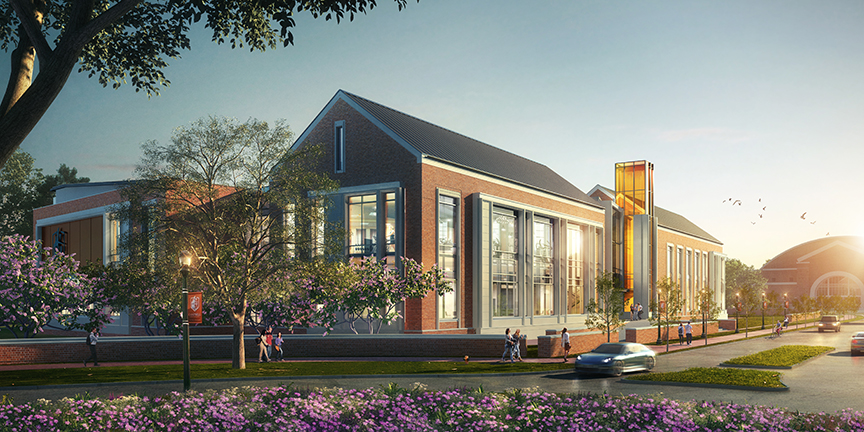 1: The 200-plus seat movie theater inside the new student union will become the first and only movie theater in Harnett County. Currently, Campbell students have to drive 20 to 25 miles for theaters in Apex or Garner.

2: The student union will be one of two new buildings coming to the Academic Circle in the next few years. Before it, a new admissions building will be built in the bare section of land between the proposed union and Butler Chapel. Like the union, the admissions building will have glass walls providing prospective students a scenic view of the campus and the iconic Kivett Hall.

35: The student union is the centerpiece of President J. Bradley Creed’s $35 million Campbell Leads fundraising campaign, to kick off this fall.

850: The banquet hall on the second floor of the new facility will seat up to 850 people for formal events, conferences, academic gatherings and more. The hall can be split into smaller rooms with partitions and will feature a catering kitchen. The entire second floor will have higher ceilings and glass walls to allow in more natural light.

100,000: The 100,000 square feet of space provided by the student union will be a tremendous upgrade from the current 11,000-square-foot Wallace Student Center built in 1978. In addition to dining, fitness, merchandising and social areas for students, the facility will provide much-needed office and meeting space for Student Life, Greek Life and other student organizations, such as the Campbell Times newspaper and Pine Burr yearbook. Several rooms and areas will be designated study areas as well. 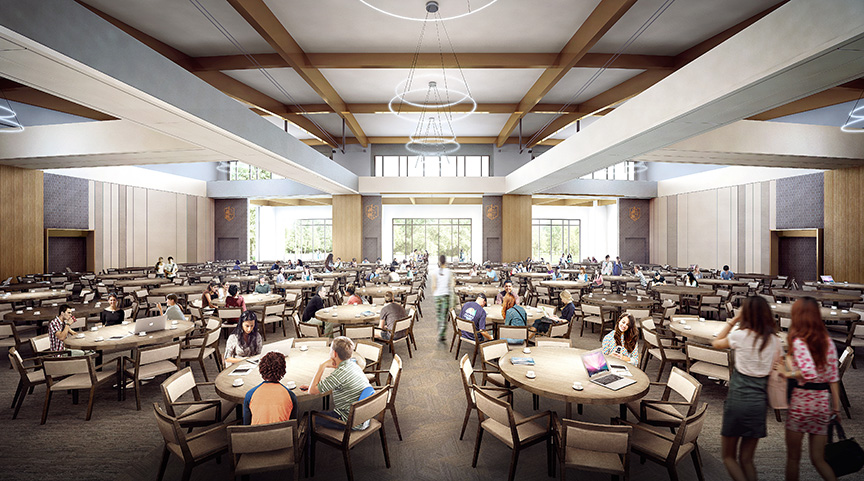