Richard Ray (’71) and J.D. Smith (’71) were strangers with a common bond (Campbell College) when they boarded a ship headed to Vietnam

It was a usual muggy day in the tropical South China Sea when, after completing a mission of refueling U.S. Navy ships in the war zone of Vietnam, the USS Cacapon returned to its port at Subic Bay in the Philippine islands.

On a Sunday afternoon in 1966, two fresh-out-of-bootcamp sailors were standing next to each other, waiting to board the Cacapon. This was the first duty station for both.

As they talked, familiarity creeped in. The two men realized they had met before — both were native North Carolinians, and both attended small Campbell College in Buies Creek.

Smith knew he had seen Richard (Ricky) Ray before when Ray worked at the cafeteria in Marshbanks Hall while both were students at Campbell a year prior. The two men both dropped out before their senior year to join the U.S. Navy just as the country was entering the Vietnam War. Both had three months of recruit training in San Diego — Ray with Company 207 and Smith with Company 202. On the Cacapon — a T3 fleet oiler first used by the Navy during World War II and later used during fighting in both Korea and Vietnam — both were assigned to the Supply Division.

An instant friendship formed between the two men, one that would continue as roommates upon their return to Campbell after the war and span over 55 years — through careers, families and eventually retirement.

Smith and Ray returned to a much-changed Campbell University in 2022 to reminisce and celebrate the establishment of the Richard M. Ray School of Business Scholarship Fund, which will provide scholarships for undergraduate business students showing financial need. It’s a gift that has a lot of meaning for Ray, who had to take the job serving his classmates at Marshbanks to afford his tuition at the time. 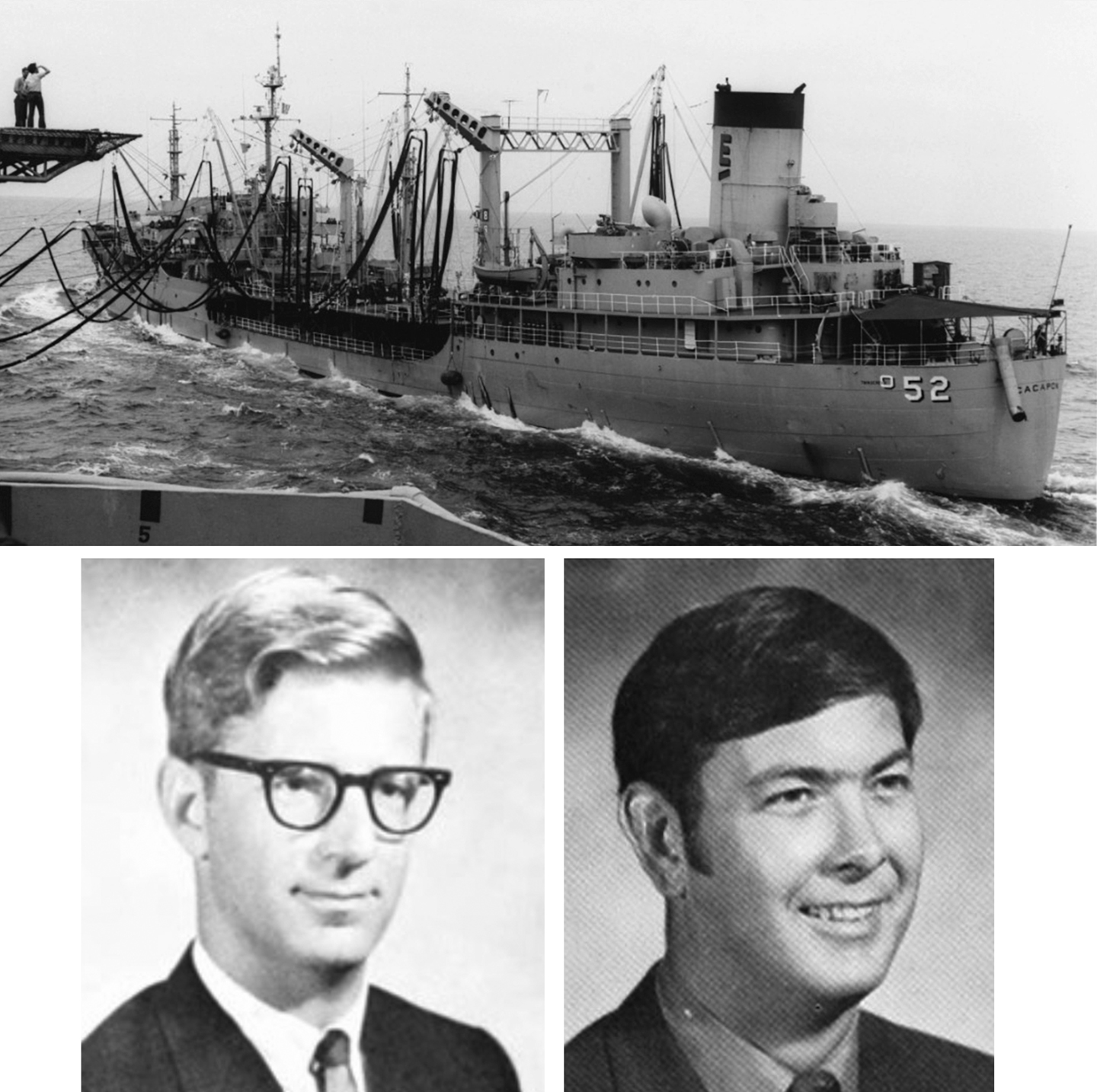 “I came from a family of poor tobacco farmers,” he says. “The only reason I went to Campbell was because one of my dad’s former preachers [“Big Miracle at Little Buies Creek” author J. Winston Pearce] was with the religion department at the time.”

Smith was always supposed to go to college, he says, but a few years in, he says his heart wasn’t in it anymore. Instead of reading books and taking tests, he wanted to hitchhike through North Carolina and find adventure. Maybe he wanted to see the world.

“I just remember thinking, ‘I’ve got to take charge of my life. I remember telling [legendary former registrar A.R. Burkot] I was dropping out. He wasn’t happy, and it didn’t sit well with my parents. They drove in from Albemarle to convince me to stay.”

Months later, Smith and Ray connected. The friendship was instant, a welcome surprise with the uncertainty of war on the horizon.

The USS Cacapon spent much of the Vietnam War supporting the Navy’s 7th Fleet (Vietnam marked the ship’s final hurrah, as it was decommissioned in 1973). Its main purpose was to refuel combat zone ships in the South China Sea and Gulf of Tonkin.

While the ship didn’t take on direct combat, the experience was far from ordinary. The Cacapon took part in search and rescue missions and goodwill missions to orphanages and leper colonies in Taiwan and the Philippines.

A typhoon rocked their ship at one point while docked in Hong Kong. Smith remembered the 500-foot-long ship bobbing up and down on what he called “a mountain of waves.” He said Ray saved him from certain death at one point during the storm, grabbing Smith and holding on to a rail after a wave knocked him off his feet and sent him within three feet of going off the side of the ship.

Perhaps what the Cacapon is most well known for in the late 60s had nothing to do with the war itself. The ship was the site of the 1968 strangulation murder of Ensign Andrew Muns, who was murdered afteer uncomvering a theft of $8,600 from an onboard safe by shipmate Michael LeBrun. Muns was initially thought to be the thief and a deserter, but his family insisted the Navy reopen the case in 1998, and that investigation led to LeBrun’s murder charge. He later confessed to killing Muns and throwing his body in one of the ship’s massive fuel tanks.

The murder capped a whirlwind two-year experience for Ray and Smith, who each would go on to serve two more years in the Navy. After two years aboard the Cacapon, Ray transferred to another ship home ported in Pearl Harbor, Hawaii (where he was part of the filming of the epic WWII movie “Tora! Tora! Tora!”). Smith remained aboard the Cacapon, ported in California. During the two remaining years of their enlistment, the two maintained contact through letters.

In January, 1970 they both got an “early out” from the Navy to allow them spring enrollment back at Campbell College. During the next year and a half, they rented a small vintage mobile home a short distance north of Buies Creek.

The summer of 1971 was a career starter for Ray with the N.C. Department of Revenue in Raleigh and Sith at the Randolph County Health Department in Asheboro. These careers finished in retirement for Ray in 1998 and Smith the following year. Ray started a tax consulting business, which he kept for 15 years, while Smith just enjoyed retirement.

The friendship that began aboard the USS Cacapon in 1966 continues to this day with phone calls, visits and travels to ship reunions throughout the country. Campbell College of the mid-1960s and early 70s was the nucleus for this friendship now spanning 56 years.

“Much appreciation is given to Campbell for providing an opportunity to achieve growth academically and personally,” said Ray. “Campbell welcomed two young men who sought a second chance and veterans who had new dreams, desires and focus.”